Only articles in with the "privacy" tag are displayed

Citizen freedoms are at the very heart of functioning democratic and civil societies and the amount of freedom citizens have while being online is certainly important in this regard. In the last years and months governments have passed laws and regulations which have restricted internet freedom: A recent example would be that ISPs and telecoms have started to store details of email and net phone calls since Monday following an EU directive which was formulated as a reaction to the 2005 bombings in London. But companies also harm their costumers privacy and freedom without being pressed by governments. Under these circumstances a closer look at online freedom seems reasonable.

On April 1st Freedom House, a US based advocacy group for political freedom, human rights and democracy, published its first “Freedom on the Net”-Report describing the state of internet freedom in fifteen different states. Alongside this report they also introduced the Freedom on the Net Index. The full report can be found here. 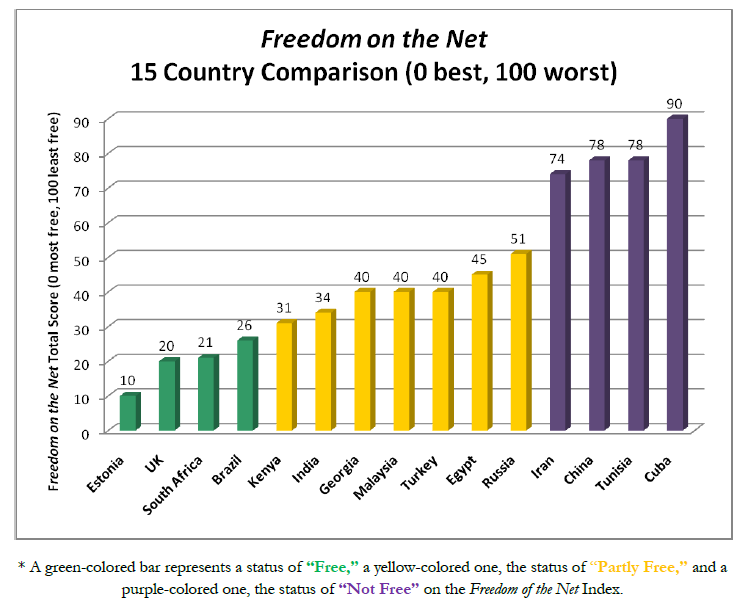 The report includes detailed information on the situation in the fifteen named countries. Hopefully the index will also get used to evaluate other countries and helps to raise awareness for the potential issues related to online freedom.

Facebook has had a bad week with five different security issues coming to light.  Hackers are coming up with new ways to steal valuable data from users by manipulating the trust and social links that drive the network.  The latest being the posting of a fake YouTube link within profiles which releases a malicious malware when clicked. (https://news.bbc.co.uk/1/hi/technology/7918839.stm)

So how do we stay social online whilst protecting ourselves? A 2006 study by Awad and Krishnan noted that whilst users will express very strong concerns about the privacy of their personal information, they will be less than vigilant about safeguarding it. A statement that possibly reflects my own use. As a non-techy-type I know not to include my date of birth in a public online space, but am I being too trusting by providing other personal information in the pursuit of social interaction?

With the upsurge of these hard-to-spot attacks, do I need to do more to protect my own data, or do we need Social Network sites to have higher levels of protection mechanisms and policies to protect members?  Or, will measures like these affect the use of the sites?

On first glance both transparency of political processes and the privacy of the individual citizen are valuable goods and should be achieved alongside each other. The technologies of new media can help to advance both of these goals: Government data can be provided in a structured way to increase transparency and citizens can protest against oppressive regimes and reduce the danger of getting prosecuted by using online communication tools. But the advancements in one of the two fields can also drastically harm the other – increased transparency can diminish privacy and vice versa.

To illustrate this I would like to point out one example. The campaigns for and against the unfortunately passed Proposition 8, banning same sex marriage in the State of California, were fuelled by a large number of donors giving just a few to tens of thousands dollars to both campaigns. As a means to improve transparency of such processes the list of donors for and against the proposition are publicized in a machine readable way on a government website. With this data and the many open and free services available on the web it is easy to setup the website eightmaps.com which shows all persons donating for the proposition and therefore against same sex marriage with their name, address, employer, position and the sum they contributed on which date. This could be seen as an attack on the privacy of those persons and not surprisingly many those, whose data is exposed on in such an accessible way, are not too happy about it.

At this point the question is what we can do if two of the most important concepts of a free and open society are in conflict with each other. One way of copping with the situation would be to follow David Brin who argues that we do not have to be too concerned about the loss of privacy as long as transparency goes in all directions and nobody is except from it. Even for the political sphere (let alone the commercial) this approach seems to be unrealistic - What would this perfect transparency be and why should all individuals be able to agree on favouring transparency over privacy in Brins “happy panopticon”? From my point of view we will have to find a balance between both goals – the right to privacy and the need for transparency in a democracy, but we also have to keep in mind that we participate in the political process as citizens who do not only bear rights but also responsibilities.

The Home Office in Great Britain adapted a plan which allows “police across Britain routinely to hack into people’s personal computers without a warrant” according to the Times Online. This kind of remote search allows both police and MI5 officers to examine suspects’ hard drives, to install keylogging software or infect the targeted computer with other kinds of malware (viruses, rootkits etc.). This can be done to a suspect’s computer at home, in the office or in a hotel room. The plan for remote search in GB is based on a decision of the Council of ministers of the European Union from late 2008 which suggests adapting “operational measures, such as cyber patrols, joint investigation teams and remote searches to become part of the fight against cybercrime in the next five years”. I already discussed this decision and its possible negative implementations for privacy and internet freedom in an earlier article.

As the plan in GB is an adaptation of the Council of ministers decision it can be seen as a blueprint for similar laws in other EU states. Therefore it makes sense to take a look at what it allows officers to do:

END_OF_DOCUMENT_TOKEN_TO_BE_REPLACED

Posted in Trends | No Comments »

The Council of ministers of the European Union issued a press release on November 27th which states the adoption of a strategy to reinforce the fight against cyber crime. Computer crime or cyber crime is a major problem of the networked world we live in. Spamming, Phishing and Identity theft are just a few of the potential crimes which can be committed using networked computers or other telecommunication devices.

From this angle it seems both reasonable and positive that the European Organisations try to crack down on these kinds of crimes. But a deeper look into the announcement and especially the proposed tools raises doubts and concerns. The Council suggests “operational measures, such as cyber patrols, joint investigation teams and remote searches to become part of the fight against cybercrime in the next five years”. The strategy also includes plans to link the different investigation forces in the member states closer together to improve their efficiency.

END_OF_DOCUMENT_TOKEN_TO_BE_REPLACED

The so called telecom package is a collection of amendments to existing European laws which will drastically change the organization of telecommunication in Europe and especially of the internet. The package will be the framework for the national laws concerning telecommunication. The purposed law has produced a lot of harsh criticism among members of the online community. This uproar is nothing less than the self-organized participation of the effected stakeholders of this law.

To better understand why the telecom package is criticised in such a fierce manner here are some statements form digital citizens of Europe. Laquadrature.net posted a document containing the most important regulations which will be put into place by the law. It also points out the problematic issues that laquadrature.net think could result from the law. For example it may be that the law would allow the Commission to “impose technical standards on content filtering and monitoring computing so called ‘trusted computing’. The Commission would be able to give the concerned by these regulation recommendations following a quick and undemocratic procedure, at the request of any national regulation authority (ARCEP, CSA, HADOPI in France, OFCOM in the UK, PTS in Sweden).” Another example is that the implementation of “technical measures” to prevent infringement of intellectual property can only be achieved by deep packet inspection or by using spyware on consumers’ computers. Slashdot thinks that the whole Peer-to-Peer infrastructure in Europe may be endangered by this. P2P is used for many legitimate purposes like Skype, the distribution of free and open source software and media content. Following the argumentation of laquarture.net and many others (as for example Members of the European Parliament) the different amendments may be a threat to privacy and freedom of internet users. It may also damage the European economy by hindering innovation.

END_OF_DOCUMENT_TOKEN_TO_BE_REPLACED

Sweden has recently been in the international news for issues related to government surveillance versus privacy.

Last week, a controversial law was passed enabling the FRA (translated into English as the National Defense Radio Establishment) to collect any and all traffic crossing the Swedish borders. Earlier, only suspicion of crime would allow the FRA to listen in. While technically limited to international communications, any internal Swedish communication that might cross the border back and forth on its way through the Internet could be collected.

The law aroused public outrage, and some MPs broke the party line and voted against it. Nonetheless, after some amendments were made, it passed. The changes include a committee that must okay the FRA to listen in (there will be a need for a reason), and the Data Inspection Board will inspect FRA activities to make sure that the privacy and protection of sources laws are followed.

However, the criticism has not stopped. Opponents believe these changes are not enough and the law is excessively invasive into people’s privacy. Neighboring countries have also complained this law will allow surveillance of most of their citizen’s communications.