Climate change is currently one of the most discussed topics in politics, which is no surprise since its consequences are threatening modern society as such. It is likely that Internet will play a major role to inform people about the latest scientific findings and the developments to be expected in the near future. Because of the interactive nature of the web it is at the same time considered to be the lead channel to launch “save-the-world” like campaigns or to develop coping strategies involving thousands or even millions of people. In other words the climate change may become an important issue for eParticipation projects.

We are already aware of some of these projects and will try to continuously report about this theme. (If you know additional projects in that domain, please let us know!). The first one I would like to introduce is the web conference “Climate 2008” (www.klima2008.net) which will take place between November 3rd and 7th this year. The project is organised by the research centre Applications of Life Sciences of the University for Applied Science in the city of Hamburg (Germany) and supported by the United Nations Environment Programme. END_OF_DOCUMENT_TOKEN_TO_BE_REPLACED

Posted in Projects, TuTech | No Comments »

For the past 1,5 years E-Voting.CC has been involved in the multilateral working group of the Council of Europe on the E-Democracy. The committee under the chairing of Thomas Buchsbaum (he also successfully negotiated the e-voting commendations in 2003/2004) from the Austrian ministry of European and International Affairs currently works on a recommendation on how e-democracy can be introduced at various levels of government.

The part where E-Voting.CC is heavily involved was the work on ‘a set of generic e-democracy tools’ where we identified and described 28 tools of e-democracy:

The toolkit will presented to the public at the Future of Democracy Forum in Madrid from 15th to 17th of October 2008. Until then be sure to check out the Council of Europe’s Democracy website at https://www.coe.int/democracy

We will keep you posted!

Part of the Pep-Net project is to make good examples of projects more visible. e-participation.net is part of the new european network Pep-Net and collects data about participatory online projects. Is your best practice example included already? Do you know of more examples? To report new examples just fill in the box at the right column - we only need the URL! The data will be delivered to an editor at politik-digital.de where a short description of the website will be written. If you want, you can also send us more information.

The website, built by politik-digital.de and the British Council Germany about one year ago, already consists of a database of about 200 projects. Now its time to include some more examples from other countries! Before launch, the partners had published a short study (PDF) in 2006, comparing the state of the art of e-Democracy in Germany and the United Kingdom (”Facilitating active Citizenship. E-Participation in the United Kingdom and Germany”).

No matter if you are a company, a journalist, a politician or a curious citizen – you certainly are interested in knowing which topics will be relevant tomorrow. The reasons for that may vary from the wish to have a competitive advantage to pure interest in a subject.

To reach this goal it seems to be helpful to use a number of tools that make it possible to identify those topics and issues that have not yet reached the awareness of the mainstream. The internet does provide a variety of tools which can help achieving that very well especially if a certain field of interest has to be monitored. I will talk about a few of these tools in this text.

END_OF_DOCUMENT_TOKEN_TO_BE_REPLACED

The PEP-NET kick-off meeting and workshop on 21-21 May 2008 in Hamburg (DE) brought together experts to discuss their visions and expectations for PEP-NET along with the possible advantages of the initiatives. One such discussion focused on the scientific and research community in particular. In addition to the formal vision and aims of PEP-NET the workgroup members discuss how each could bring their unique abilities and resources to the network. The outcome of the discussions relevant for scientists and researchers is highlighted below:

ABILITIES AND RESOURCES FOR PEP-NET 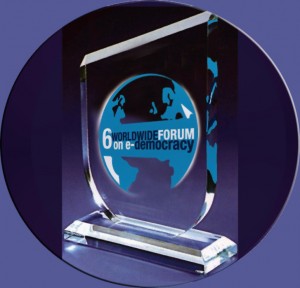 50 eDemocracy initiatives and websites across the EU 27 are selected for the European eDemocracy Award 2008 and analyzed according to 2 combined innovative indices:

The IP-LABEL INDEX is a ratio out of 20 measuring these initiatives in terms of availability and performance over a month period.

The POLITECH INDEX is a ratio out of 40 measuring these initiatives in terms of innovation, usability, content and diversity of technology and tools strengthening participatory representative democracy in Europe and reflecting 4 key dimensions:

1) The Political Dimension – measures the use of ICT to empower, activate and mobilize political and civil society actors to meet public affairs objectives, while being on top of the political agenda;

2) The Democratic Dimension – measures the use of ICT to strengthen citizen participation in the democratic and decision-making processes and enhances representative democracy.

This a key dimension as emphasized by Dr. Lawrence Pratchett’s C.L.E.A.R. Model in which people participate when they can and have the necessary resources to make their argument and when they feel part of something, they like to participate as it is part of their sense of identity, when they are enabled to do so and directly asked for their opinion and when they experience a responsive system;

3) The Civic Dimension – measures the use of ICT to inform, train and educate constituents, citizens and END_OF_DOCUMENT_TOKEN_TO_BE_REPLACED

On Wednesday and Thursday last week the PEP-NET partners came together at TuTech’s premises to start the project. Although some of the partners knew each other already, it was the first time that the entire project consortium met. It became obvious during the two day workshop that the consortium is remarkable in at least three regards:

In the course of the workshop the different partner introduced their organisations and agreed on the activities for the next six months. High priority has this weblog which we will try to develop to one of the visible resources for information about eParticipation in Europe.

It is planned to publish at least one new article/ posting on each working day. The readers of our blog can expect information on eParticipation related events, the description of interesting cases, reports about eParticipation strategies and general discussions about the current state of eDemocracy and eParticipation in the different countries of the European Union. However, we all agreed that a weblog will only considered to be successful if readers comment on the postings. So please feel cordially invited to discuss with us the various issues of eParticipation in Europe.

On the first day of the meeting the consortium has further more split into three different groups to discuss about the expectations, visions and benefits with respect to the PEP-NET project. The result of this exercise was a clear picture on how PEP-NET can serve the interests of its different stakeholder groups and what roles the members are willing to play in order to help PEP-NET taking off. The concrete results will be introduced in separate articles soon.

Finally we discussed also how interested organisations or individuals could join our network and whether PEP-NET should be transformed into a formal organisation. While this discussion will be continued during the next weeks, we encourage all interested parties to apply for membership (info@pep-net.eu). We will contact all applicants and specify the exact terms a.s.a.p.

I have attached some pictures from our kick-off meeting. 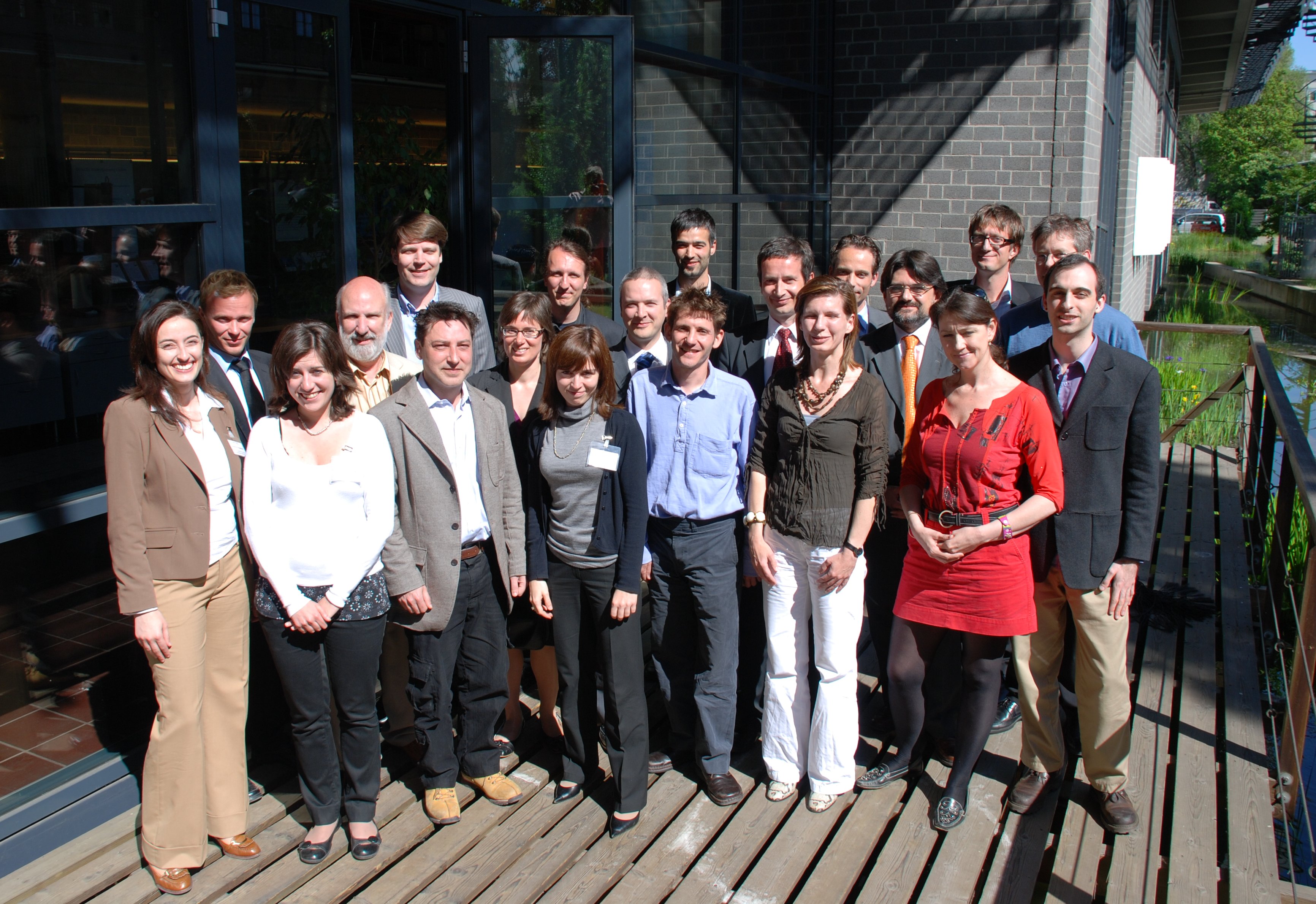 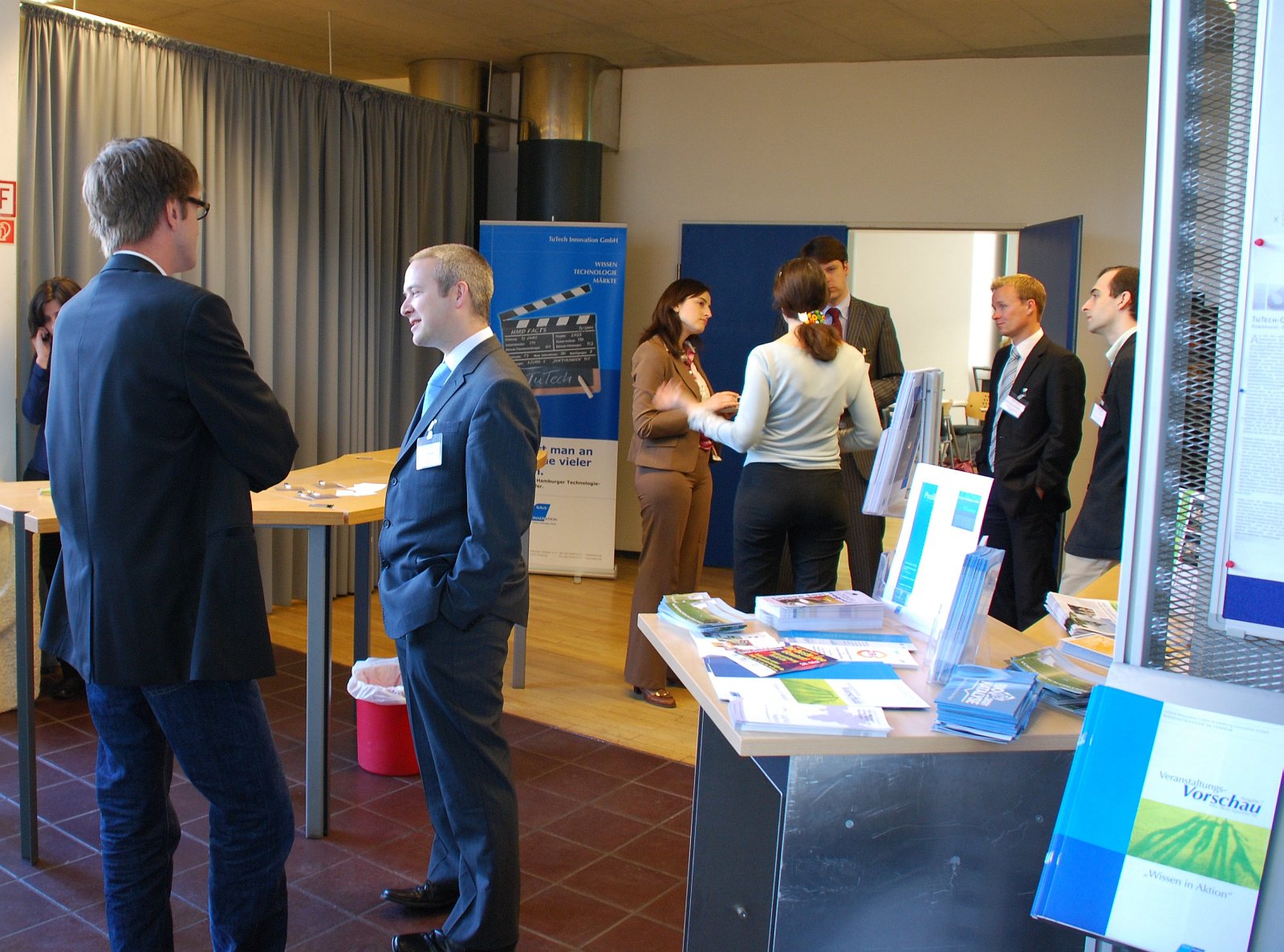 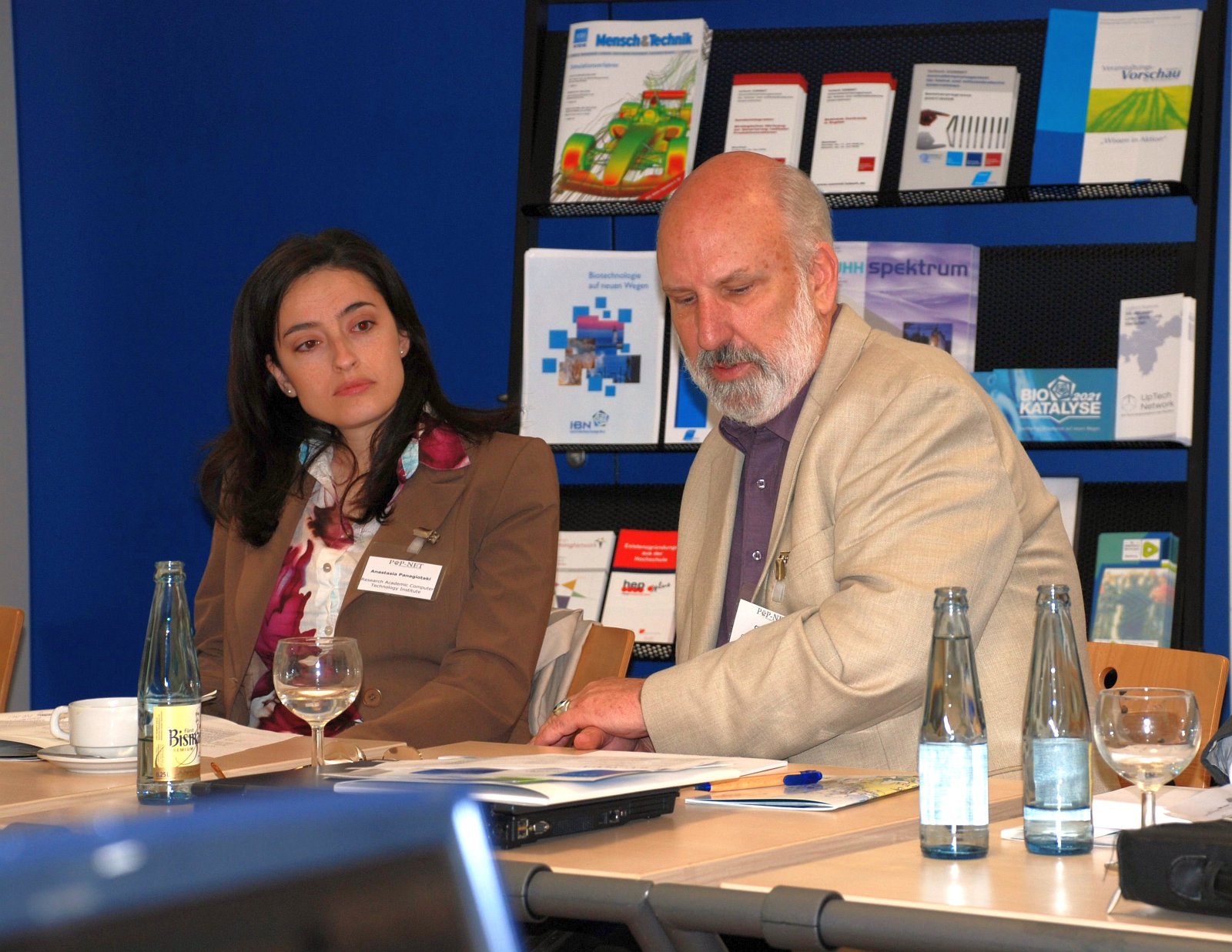 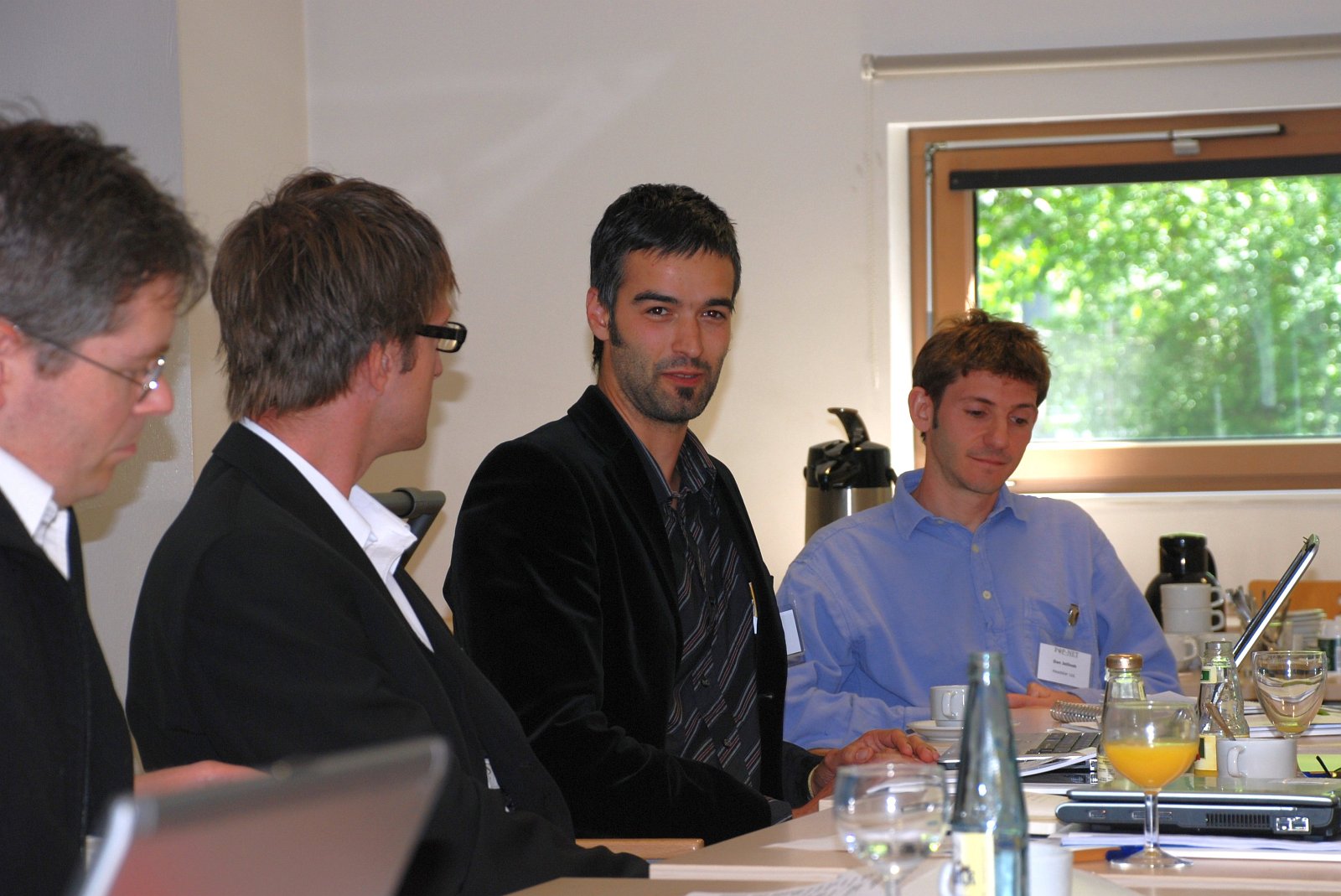 Currently a business consultant for several public and private organizations, with a particular eye on fund raising and management of EU supported projects and initiatives, between 1994 and 2002 he has been economic and financial manager at a local development agency based in Massa, with 800+ associated SMEs. In that position, he was chair of the Massa-Carrara Territorial Pact.
In 2002 he was a manager at Massa-Carrara Chamber of commerce and then between 2003 and 2008 strategic advisor of the Mayor of the City of Massa, with special assignments in the areas of internal process restructuring, ghost writing and high coordination of all the municipal corporations. Between 2003 and 2006 he was also a contract professor at Pisa University, designer of the e-Government module at the Political Science Faculty. In 2007 and 2008 he joined the International Research Unit at ALTEC SA, the second largest ICT company of Greece for R&D expenditure, holding the responsibility for eGovernment research.

For the European Commission, DG INFSO, Unit F4, he led in 2008 a study for the assessment of the Living Labs approach in the EU innovation scenario. He was also part of a previous study regarding the impact assessment of ICT RTD and deployment on national and regional innovation systems, funded by the Evaluation Unit of the same DG. His current research interests include quality management in local Government, community evaluation of public services and the impact analysis of collaborative technologies into social and institutional settings.

May 1st has been set as the official launch date of the Pan European eParticipation Network. With that date having arrived we looking forward to working with our initial partners and everybody joining us on our way.

In the next years we will try to advance the participatory efforts in Europe and to build a open and strong network including members from all stakeholders active in the field.

As PEP-NET is all about exchange of knowledge and the will to further develop eParticipation in Europe we ask everyone to join our conversation both online and offline.