Barack Obama’s Transition Team promised to build the most open and tansparent transition of all times. How did they carry on Obama’s sucessful online election campaign and how did they involve citizens online? We had a close look at the engagement tools used on change.gov – the Citizen’s Briefing Book, the discussion forum “Join the Discussion” and a tool called “Open for Questions”. Furthermore we give some predictions of the next steps of Obama’s Administration Online-Team.

On January 20th, “change will come”: Barack Obama will be sworn in as the 44th President of the United States. With his elaborate online election campaign, he build himself an image as being the “digital president”, inseparable from his Blackberry and skilled in using online-tools for direct communication with his supporters. His online success raises great expectations for the presidential communication strategy during the Administration: According to PEW Internet Research, about 46% of his supporters expect to hear from their candidate directly; about 62% want to be asked to support the policies online. 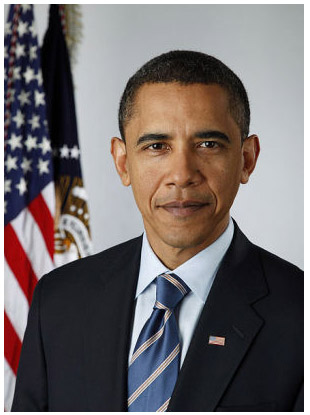 While there is still to see how the online-movement continues and if the momentum created by his campaign can be carried on during the Administration, it is time to have a look at how citizens were involved during the transition. After all, the Transition Team announced the ambitious goal to build the most open and transparent transition of all times and wanted to offer opportunities to participate in redefining government.

The Transition Team started to engage citizens online on change.gov with a discussion forum: “Join the Discussion” and an online tool for posting questions: “Open for Questions”. But the probably most interesting and promising participation-tool was introduced just on Monday before the Inauguration: The Citizen’s Briefing Book. Users can publish their opinion about any topic concerning the incoming Administration as well as rate and comment on the suggestions. Transition Team member Valerie Jarret announced in an E-Mail: “The best-rated [ideas] will rise to the top, and after the Inauguration, we’ll print them out and gather them into a binder like the ones the President receives every day from experts and advisors. If you participate, your idea could be included in the Citizen’s Briefing Book to be delivered to President Obama.”

The system itself is quite easy to use: Users have to log in before posting an idea or a comment with a WYSIWYG-editor. They can choose if they want to see the most recent or the most popular ideas. Voting is rather simple, too, using big and clear buttons. Users can not only express their agreement, but also their disagreement with a suggestion: “Voting up” means the idea wins ten points, “voting down” means the idea looses ten points. Every idea can just be voted on once (as long as a user does not log in with several accounts). 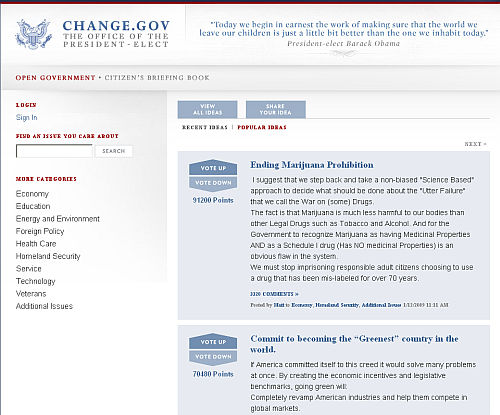 Categories according to politic fields give a bit of a structure to the huge amounts of submitted ideas. Not all of the comments really hit the point, some are redundant, and some participants use the ideas to start meta-discussions about the engagement-process itself. An active moderation is not visible. But looking at the highest ranking suggestions shows that the user-rating seems to work – just ideas dealing with real policies, including a relatively wide field of topics, have been voted to the Top Thirty.

Still, the participants submitting meta-comments raise some points the Transition Team should take into consideration: e.g. a user called “Early Bird” suggests to “bring cooperation to the Briefing Book buy (sic!) providing a way for participants to combine their ideas with other participants and edit them as a group.” Until now, it is not possible to edit the ideas once they are submitted. User collaboration is restricted to voting and commenting – and it is not clear, if and how the comments will be included in the final briefing book. Also an opportunity to combine similar ideas seems useful, considering the redundancies. For example, Idea No. 1 (on Friday, Jan. 16th) dealt with the legalization of marijuana, especially for medical purposes – a topic already raised several times in the “Join the Discussion”-forum and the “Open for Questions” tool. Also some other contributors submitted basically the same idea to the Briefing Book.

The Transition Team and members of the incoming Administration already react to the submissions in video-postings on change.gov – following the model they used to give answers to the three discussions held with “Join the Discussion”-tool and the questions gathered with “Open for Questions”.

Considering the Citizen´s Briefing Book, “Join the Discussion” seems a bit like a finger exercise. Three discussions were held until the Inauguration, starting on Nov. 26th 2008: about Health Care, about the economic crisis and about service and social causes. Contributions ranged from 3,700 comments submitted in one week during the Health Care discussion to 4,700 during the discussion on social causes. 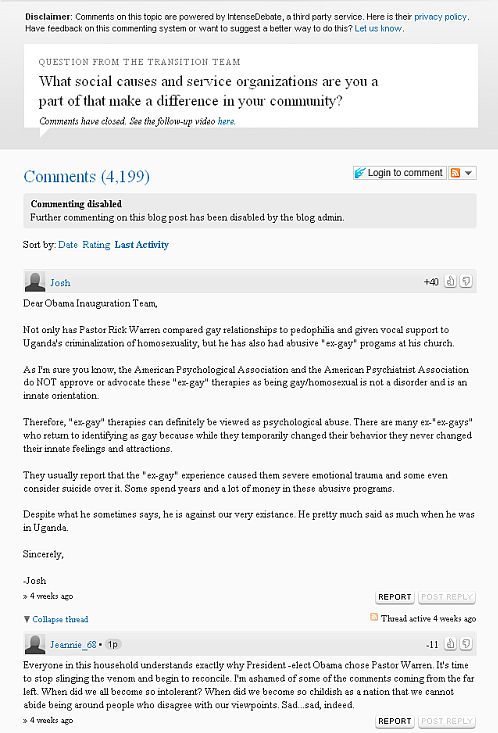 Screenshot of Join the Discussion

While the high level of participation and the fact that officials answer user-questions seem to speak for a successful engagement, the implementation raises some questions. “Join the debate” uses Intense Debate (LINK), a threaded discussion forum. This does not seem to be a very practical choice, because there are almost no ways to structure the discussion. With a high traffic and a lot of people commenting – as you could expect with a presidential debate forum dealing with questions of national importance – this inevitably leads to some redundancies. In a discussion on DoWire, e-participation experts criticize the system for leading to a low signal-to-noise-ratio and a rather unfocused discussion. Also an informed debate is not really possible because no background information is provided.

An effective moderation seems almost impossible due to the huge amount of comments and the unstructured threads. But then, there are no hints for any active moderation besides the comment policy stating that the Transition Team reserves “the right to remove violations“. So the chosen system makes it a very time-consuming process to evaluate the comments. The blog-posts claim that the answering team-members have read all of the thousands of entries – it would be interesting to know how much time they have spent with this task. In addition, it’s not really clear how the comments answered in the video posts have been chosen – here the Transition Team shows not as much transparency as promised.

Like the other engagement-tools, “Open for Questions” also proved to be rather successful: during the first round about 20,000 people submitted 10,000 question and cast 1,000,000 votes; during the second round even over 30,000 people participated, submitting about 76,000 questions and casting over 4,7 million. votes. “Open for Questions” uses Google Moderator – a tool which seems quite handy, easy to use and has the advantage of presenting and highlighting random questions, so that users get a chance to vote on others than the already high ranking questions. But it leads to questions concerning the data security: according to Google Moderator’s Terms of Use, the content is stored and processed by Google.

An Impressive Start and the Next Steps

Having said this the achievements of Obama’s Transition Team are impressive:

Especially the latter is most astonishing for people like us, who offer their services to public organizations and are used to long and tiring negotiations before online-dialogues can actually start! It proves again, that the development of e-participation is not hindered by methodology or technology, but by lack of political will. If decision makers are determined to ask their voters, and provide their team with the necessary resources, it is very easy to apply the tools quickly and successfully.

What will be the next steps of Obama’s Administration Online-Team?

• They will ask their users to abandon the status of anonymity and become reals citizens with names and sociodemographic attributes. For voting on YouTube videos anonymity is fine, but if the presidential briefings will become more than a public-relation-tool, the people behind have to identify themselves.
• Voting on topics will be bound to deliberation. If you want to get the “wisdom of the crowd” you have to ensure, that most of the crowd is reasonably informed about the topic at hand. Otherwise bias takes over and you get misleading voting results.
• President Obama will transport the results of the online-dialogues from the Internet-sphere to the television mass media. This will generate even more participation in forthcoming online-dialogues but also more pressure on the actual use of the results.
• On matters of foreign policy, Barack Obama will launch a global online-consultation.
• Even with high numbers of participation, traditional policy makers will fight a strong battle against the the new player in the field. They will try to undermine the reputation of the “aggregated citizen-recommendation”.

These are intuitive predictions of the future… what do you predict?