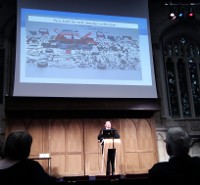 At the “Open.gov & e-participation” conference in Belfast on 22nd September I said a few off-the-cuff words about open data in Germany before presenting DEMOS-Plan, the spatial planning consultation software that we have developed together with the local authority in Hamburg.

I think it’s fair to say that the open data debate is not quite as far ahead in Germany as it is in the UK. Although there are good examples (MOGDy, Apps4Berlin, Berlin’s new open data portal, the Bremen open data recommendation) here of local authorities and third parties opening their data and demonstrating what they can do, the UK government’s commitment to opening data as demonstrated by data.gov.uk and its recent consultation on ‘Making Open Data Real‘ show that the debate has moved on from ‘whether’ to ‘how’.

However, I argued, based on experience of eParticipation more generally, when Germany does catch up it will commit to well thought-out solutions that are implemented sustainably. The examples I used were Hamburg’s social media guidelines — which I have previously mentioned on PEP-NET and which describe in detail how Hamburg handles social media — and our own DEMOS-Plan, which is fully integrated into Hamburg’s infrastructure, is ‘business as usual’ because it will from now on be used for all local plan consultations in Hamburg, and is backed up by a procedure that gives citizens and stakeholder organisations a legal right to participate in urban planning, both online and offline.

If things happen in a similar way, I think open data will take off in Germany and many of the same issues that the UK is wrestling with will apply: so it will be necessary to think about the costs of opening datasets and to decide on which ones have priority. How do you decide which datasets are worth the investment? Do you assume that businesses will be built on the data public bodies publish, or do you prescribe a specific purpose that data should be used for? The UK government is quite clear in its white paper that enabling service users to make a more informed choice about which providers they use is an important motivation.

One issue that I think will be get more attention in Germany than in the UK is data protection. You get a good idea of how jealously Germans guard their privacy if you have a look around a residential area with Google Street View — in some cases, so many houses are blurred out that it is pretty much useless. Or see the Unabhängiges Landeszentrum für Datenschutz Schleswig-Holstein’s (Data-protection Commission for the State of Schleswig-Holstein’s) decision that Facebook pages and ‘like’ buttons on third-party websites contravene data protection law and should be stopped with immediate effect. In this context, I find it difficult to foresee Germany adopting an ‘open by default’ policy with regards to data. The risk that personal data could slip through the net could be too high.

So I think the German public sector is working on these issues and when the strategy is nailed down, it will be embedded for the long term. In short, open data will at some point be business as usual, even if it Germany doesn’t do ‘open by default’.