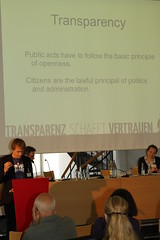 Campaigners for a local transparency law, the so-called Transparenzgesetz, can look forward to a  summer watching the football with a cool bottle of Astra and a Bratwurst. Expecting stiff resistance from the local authority, they had planned to spend the next few months preparing for the next round of a local citizen’s initiative, which would have required them to collect thousands of signatures in order to force a referendum. But to many people’s surprise, an adapted version of the law was passed last week.

Following negotiations with all parliamentary party groups and the campaign’s initiatiors (Mehr Demokratie, Transparency International and Chaos Computer Club), a text was agreed upon and passed on 12th June. By introducing an inventory of publicly held information, including data, and obliging public servants to open information by default, the law will go a long way to increasing transparency in the local authority. The types of information that are included in the duty to publish are, amongst others, contracts for public services, official statistics, geodata and spatial development plans. Where there are compelling reasons, such as data protection or the protection of sensitive business information, the duty does not apply.

This law supersedes the Freedom of Information Law, passed in 2009. Hamburg’s wide range of instruments for involving citizens extend from citizens’ initiatives on a local level to livestreaming parliamentary proceedings, via the online spatial planning consultation system that TuTech developed with the city. The Transparency Campaign and the Parliament are in agreement that Hamburg is set to become Germany’s most transparent state, its transparency capital. As far as I know, this is the best example of open data and transparency being pushed through by a civil society campaign.