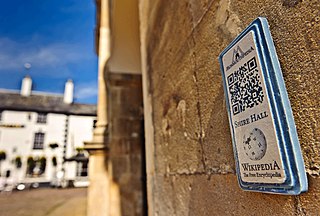 The Welsh town of Monmouth is to become the world’s first “wikipedia town”. In a project that involves kitting out the whole town with free wifi hotspots and sticking QR codes on all significant monuments and places of interest, “Monmouthpedia” enables tourists to call up community-generated articles on their smartphones.

I can see this being a success because the QR codes make it much easier to find information about specific objects without having to type in a long, complicated URL, and you have a good idea of what information you are requesting. In many cases, QR codes are used unnecessarily (presumably because they are fashionable) on flyers and posters and link to a company’s website, which would be easier to call up by typing in the URL or searching for it. I also find that you often do not know what the QR code links to, which isn’t a great motivating factor either.

Another innovative example of QR code use is the Korean supermarket in an underground station that consists of pictures of products, each with an associated QR code. Again, the QR code links to a very specific object and it’s obvious what you can expect when you scan the code.