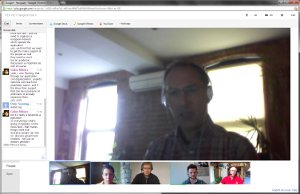 Today we held the second of two Google+ Hangouts with PEP-NET members. No real agenda, open to anyone who was interested, and not quite sure whether it would work. We gave it a go.

From an organiser’s point of view, the best things about doing a hangout rather than a text-based live chat (as we have done before with CoverItLive) is that i) the number of participants doesn’t need to be high for you to feel successful and ii) you can really see who is there and know that people were there for the duration. If I had organised a live text chat and six people in total had taken part, I would have been pretty disappointed.

Rather than writing boring minutes of the conversation, here is a collection of links to projects that were mentioned, as well as the websites or twitter accounts of the participants themselves. After all, it’s the taking part that counts, not the minutes.

Finland: Youth Initiative Channel, a project allowing youngsters to make suggestions/express wishes. Similar to FixMyStreet but about solutions, not problems.
(Some information in 2.3.1. of this report (PDF)), via @nadinekarbach.

Iceland: A group of citizens drafted a new constitution using online collaboration tools and presented it to the speaker of the parliament. Here’s a link that I found about the story, via @nadinekarbach (again)

Finland: The Finnish children’s parliament, via @nadinekarbach. (Now I feel like a kid copying someone else’s homework. Thanks Nadine.)

UK: 38 Degrees: a platform that brings people together to campaign, via @andywilliamson

The Danish Parliament puts videos of all its sessions online, and has made them fully searchable by users. Here’s an article I found about that. Thanks again, @andywilliamson