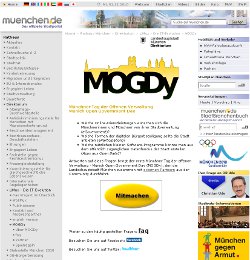 They say a week is a long time in politics, and in eParticipation a day is just as long: Munich Open Government Day (MOGDy) is lasting, er, several months.

- what online services should the local government provide?
- what eParticipation initiatives should the city engage in?
- what apps could make use of the data that the city will shortly release?

Any citizen can suggest ideas and rate other people’s ideas. The five people with the top ideas will get tickets to the Oktoberfest. At the MOGDy Camp on 21st and 22nd January 2011, the city will launch its open data programme in which it will be releasing data and encouraging developers to get stuck in and create useful apps out of them. The best apps will be awarded prizes and the City will present them online.