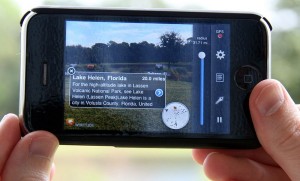 In a nutshell the term augmented reality describes the enhancement of a live picture provided by camera (mostly on phones) with additional data (commonly gathered from the internet). The data shown is located in space so that the viewer only sees the data he or she is close to. The picture above for example is an example using the Wikitude world browser on the iPhone. Here the live view is enhanced with data from Wikipedia. This kind of technology is available on most location aware smart phones today and is very easy to use.

This video shows this augmented reality app in action:

In an eParticipation process linked to a location this technology can be used in different ways:

This kind of technology use does not exclude participants who would rather use a normal website to get involved. Any comment made in the augmented reality can be displayed in on website either with the location shown on a map or as text information. On the other hand any information enter into a website and amended with geo-data can be used in an augmented reality application.

Overall the augmented reality approach is very promising but the technological hurdles still limit the potential user to a small number. This however might change over the course of 2010 which might be year of location aware devices and software.

In late 2009 Google introduced a new service called Google Goggles which allows smart phone users to snap a picture of a landmark, book cover or company logo and get search results based on whatever is shown on the picture. Of course the Goggles is only one implementation of automated image recognition but it shows how fare this technology has developed. The following video explains the tool:

This kind of technology is still in its infant state but I would like to suggest a few ideas how it might be interesting in an eParticipation context:

Both technologies presented here have potential to enhance eParticipation processes and are signifiers for the two major trends of universal internet access and location awareness. Maybe the suggested uses for eParticipation will not be mainstream any time soon but the overall trends will affect the field in some shape or form very soon.

I for one welcome these possibilities and challenges.