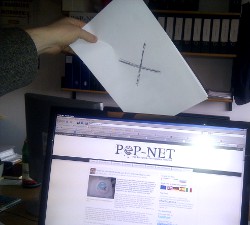 Voting via the internet

The Estonian national elections took place on 6th March, returning the incumbent centre-right coalition to power. As in previous elections, citizens were also able to cast their vote over the internet — this time from 24th February to 2nd March.

The overall election turnout increased only marginally (by less than two percentage points over the last general election) but there was a massive rise in voters who cast their vote on the internet, from 5.5% to 24.3%.  This may be partly due to the longer time during which voters could go to the online polls, which increased from three days to seven; but it also suggests an increasing awareness and acceptance of the technology.

As well as voting online, Estonians made use of other online tools to help them decide whom to vote for: the website https://valijakompass.err.ee/, which is a tool that helps voters pick a party according to the policies they agree with, reports over 100,000 hits. (Thanks to Hille Hinsberg for the tip-off!)

You can find  a more detailed analysis of the results by Manuel Kripp, Director of the Austrian E-Voting Competence Centre E-Voting.cc, here.