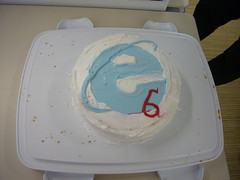 A campaign to put Microsoft’s decade-old web browser, Internet Explorer 6, out of its misery is nothing new. There has even been a petition on the UK Number 10 petitions website calling on government to upgrade to a modern browser, which was rejected, and Google dropped IE6 support for its apps more than a year ago.

The novel thing about ie6countdown.com is that the organisation behind it is, er, Microsoft. Needless to say, they call upon users to upgrade to Internet Explorer 8 and don’t mention the other browsers out there (such as Firefox, Chrome, Safari and Opera). Anticipating probably the main argument for retaining IE6, they dedicate a part of the website to corporate users.

Developers have long complained that adding support for IE6 adds complication and cost to the process of creating websites that government employees can use. From a government employee’s perspective, IE6 is just another barrier to engaging with the outside world through the internet on top of restrictions on social media access and third-party software such as Skype. 3.5% of UK users are still hooked on IE6, as are 2.9% of German users, and 3.3% of Italian surfers. Finland and Norway lead the way with 0.9% and 0.7% respectively.

So, will this add to the pressure on governmental organisations to make the switch?