Germany’s Defence Minister, Karl-Theodor zu Guttenberg, has temporarily forgone his PhD following accusations that his thesis is shot through with plagiarism, including unacknowledge quotations from newspapers and other politicians. Some jokers have been selling pared-down keyboards stripped of all but the CTRL, A, C and V keys, necessary to perform the ‘select all’, ‘copy’and ‘paste’ operations; essential weapons in any plagiarist’s arsenal.

“Guttenberg Gate” or the “Googleberg Affair” has prompted a crowdsourced proofreading of his thesis by anonymous German citizens. They aren’t backward in coming forward when reporting instances of plagiarism that they have found: so far, according to the graphic on the front page, there is at least one unacknowledged quote on 68.7% of the pages.

Until now, Guttenberg was Germany’s most popular politician whom many saw as capable, charming and possessing integrity. This affair has shown that it is difficult to be one person in public and another in private because the internet allows thousands of people – whatever their motives – to organise themselves and air your dirty washing in public. Because the participants in the wiki are anonymous, there’s no telling whether they are political adversaries or simply passionate academics interested in protecting the integrity of their discipline; but it is likely to be some mixture of both. 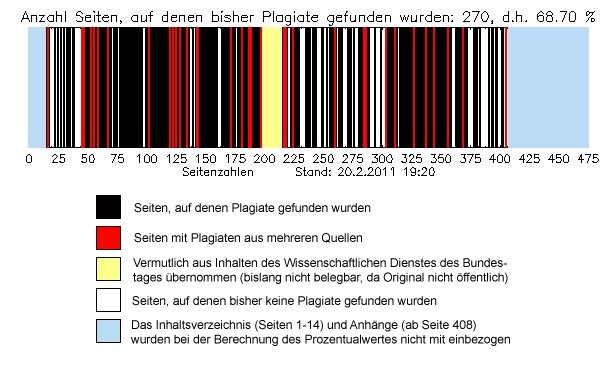 The graphic from the Guttenplag wiki; 69% of pages contain a plagiarism

As in the UK MPs’ expenses affair, we see openness in public life resulting in citizens being disappointed when they think their representatives cannot live up to their expectations. In this case, Guttenberg stands accused of lying on oath and is liable to prosecution if it turns out that he lied about the originality of his thesis. He is also alleged to have abused his office as an MP by making enquiries through the Bundestag (German Parliament) and copying the answers into his thesis without acknowledging the source. So you may argue that he deserves to be deprived of his office.

But everyone has skeletons in their cupboard and it is inevitable that, as politics becomes more open, we will have to accept that politicians aren’t perfect and consider what we can realistically expect of them, and what we can forgive them for. Guttenberg aside, I think it would do us all good to get real about what we expect of politicians on a personal level; if openness and transparency force us to have that discussion, then I’m in.

Aside from the issues of our expectations of politicians and the line between their public and  private lives, an interesting aspect of this is the usefulness of the results. An important criterion for sustainable eParticipation is often said to be the quality of the results that it produces, meaning that there needs to be some way of aggregating citizens’ input. The GuttenPlag wiki presents the results in quite an easy-to-digest fashion that I imagine would be quite useful for the ultimate addressees, the commission at the University of Bayreuth that is assessing whether the thesis is still valid. Quite simply, there is a list of page numbers where you can click to see the alleged plagiarisms on each page with detailed information justifying the allegation. The wiki moderators will only accept plagiarism accusations that are corroborated by two people, providing a simple way of aggregating the results in a useful format. In this case, the task to be completed is very clearly defined and the format is simple but effective.

Finally, the graphic that I noted above is a good example of a point that is often made about open data; namely, that you have to be careful about being misled. At first sight, it may seem like 68.70% of the content in the thesis is a plagiarism because that’s the number of pages on which an alleged plagiarism occurs. However, on closer inspection you realise that a single plagiarism on one page means that that page is then deemed a plagiarism whether the whole page is a copy-paste job or just one sentence or phrase. Ridiculously, if Guttenberg had printed his thesis on smaller paper, he presumably could have come off better: smaller, and hence more, pages could mean that each plagiarism would make up a smaller percentage of the total (assuming it was contained on one page).