Images for reflection (II): “So… what is (e)participation?” 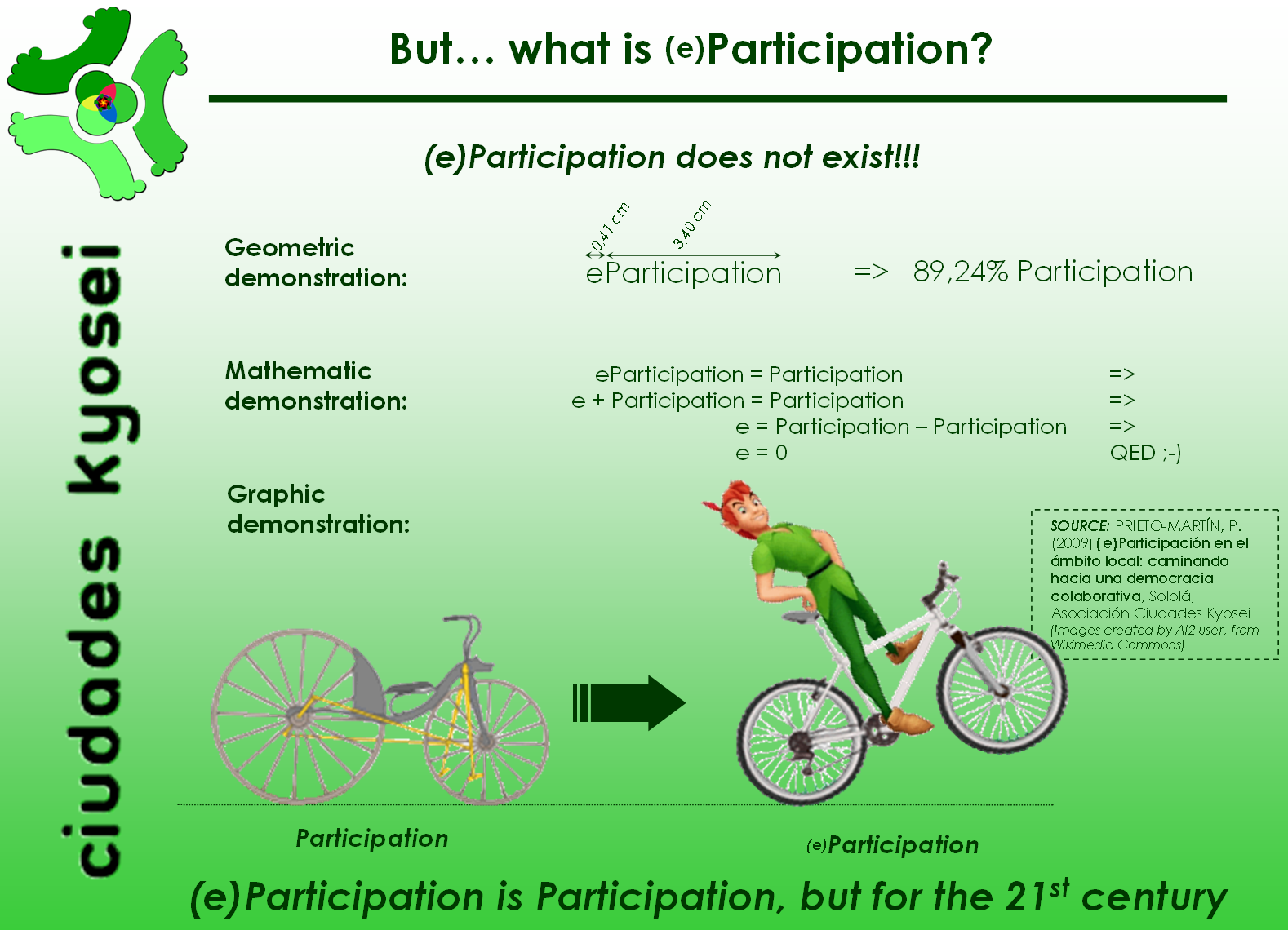 Again: everybody is invited to reflect.

(this image was introduced and partly explained as part of the discussion on the previous post: Impressions of the eDem 09 conference in Vienna). Reproduced below:

[ Well, I’m not sure if the “e-” should be dropped. Dropping could be too radical, and the e actually “adds” some meaning.
But I’m also not happy with the suggestion from Peter: to consider Participation and e-Participation as two very related things, but somehow also different: e-Participation understood as an extra channel for participation. Thus, we would need to be able recognize how to combine both and when to use each of them.

I think what is needed is to correctly relate the “e-” side to the “Participation” side of the mix.

1. Recognize the diminishing meaning of the e- part of the term. In the next years the “e-” will surely just disappear. In the same way that we no longer speak about e-Banking, because we assume that any “Banking” worth its name MUST integrate an “e-” infrastructure that empowers it… citizen Participation without an “e-” backing will simply be a contradiction in terms.
It’s the same case with “electric lighting” too. “Electric lighting” was probably an expression profusely used at the beginning of the XX Century: but now, most of the time, we no longer explicitly name it “electric” -we just assume lighting “is” electric, since gaslighting belongs to our history.

This is the reason why our association, since years, uses the alternative “(e)Participation” term, that emphasizes the fading significance of the “e”.

2. But at the same time that the “(e)” significance fades away… it gains more and MORE importance.
It is clear that the “e” doesn’t change the fundamental meaning of “participation”, that it doesn’t change its essence.
[Sadly enough, most “experts” on e-Participation still do not realize this. They have traditionally considered (and “sold”) e-Participation as something essentially different from Participation. And they have done this because, in most cases, they had NO idea what the traditional “Participation” is about, and what are the problems and dynamics associated with it. And they weren’t willing to read the thousands of socio-political papers devoted to it

Anyway, let’s go back: we were saying that the diminishing “(e)” does not change the nature of Participation.
But as time goes by, it will completely change the way Participation works. And it will also change our notions on what is possible to attain through Participation (and thus: through Democracy).
Again, the (e)Banking example is very illustrative. Using computers, networks and the Internet for banking and finance revolutionized what could be done. Not sure if those changes were for good… but the fact is that (e)banking, without changing the very nature of banking, radically changed the way banking works. ]

[This second “Image for reflection” tries to express in a vivid an humorous way what we have just explained.]