Controlling Internet Content is a sensitive issue for all governments – democratic or non-democratic. However, the kind of censorship applied in China or Iran is a complex matter and should be discussed by other authors. This article gives a short overview of current activities in recognized democratic countries. It raises the question, if national regulation of the Net is appropriate at all.

German Federal Minister for Family Affairs, Ursula von der Leyen, recently caused a lot of protest from net activists. In an attempt to fight child pornography, she introduced a law that obliges Internet Service Providers (ISPs) to install „Stop-signs“ in front of corresponding websites. Her opponents criticize this plan, because of the stop-signs being technical insufficient (they can rather easily be circumvented through other DNS-Servers) and they just hide the problem instead of fighting it. 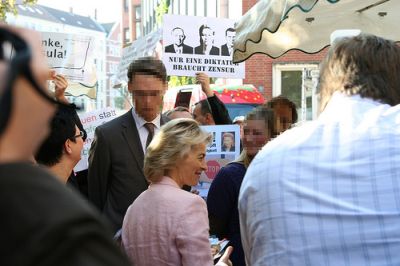 This is just one example of how governments try to control the Internet. But not only the state, also ISPs have an interest in controlling content and Internet access. This article gives a short overview of different attempts.

The ideal of the Internet follows the principle of Net Neutrality, where all content is treated equal, resp. neutral, and can be accessed equally by everybody.
But reasons why governments and industries try to control the web are manifold:

# First, there are social and political reasons, like dealing with offensive content, hate speech, racism or terrorism. This affects content control, e.g through web filtering, content removal, URL blocking or the banning of search results.

# Secondly, there are economic reasons, affecting access control, e.g. ISPs offering higher bandwith for customers who pay higher rates. As well, ISPs could allow faster access to their own content than to the content of their competitors.

# Thirdly, there is the question of copyright protection.

In the US, the political discussion focuses on controlling Internet access. President Barack Obama revived the debate about Network Neutrality in 2009 when he included it in the American Recovery and Reinvestment Act. The money provided by the state to foster broadband connection, 7,2 billion US-Dollars, should be used to “support the principles of network neutrality to preserve the benefits of open competition on the Internet.”

Nevertheless, this does say nothing about social control of the web. According to the OpenNet Initiative (ONI), an initiative monitoring Internet filtering all around the world, Web filtering in the USA relies mostly on content removal than on URL blocking. Most urges to remove content are by private action, not by the government. Internet users can also opt to install a filtering software on their computer, blocking the access to offensive content.
This filtering software is obligatory for public schools and libraries which want to get federal funding for Internet access.

Concerning copyright protection, the US follow the so called notice-and-takedown provision: As soon as an ISP is informed about a copyright violation, it has to remove this content from its service.

The European Union undertakes efforts to create a set of common policies and practices. Recently, the EU debates about the telecoms package which aims to unify the EUs telecom market for all member states. It is expected to become law in late 2009 or in 2010.
Especially France voted for adding a strict copyright protection law to prevent file sharing by cutting of file sharers internet access. This caused protest by European civil organisations and data protection activists. The European Parliament then amended the package once again, adding the abstract:
“(fb) applying the principle that no restriction may be imposed on the fundamental rights and freedoms of end-users, without a prior ruling by the judicial authorities, notably in accordance with Article 11 of the Charter of Fundamental Rights of the European Union on freedom of expression and information, save when public security is threatened in which case the ruling may be subsequent.” (see Wikipedia)

Net activists still fear that the telecoms package gives ISPs the right to limit Internet user’s access to websites and gives companies the right to privilege their content over other data, creating a “split internet”.

According to ONI reports, web filtering is rather the norm than the exception in most European countries. Filtered content includes child pornography – see the example of Germany in the beginning of this article – racism and hate speech. Some countries, like Norway and Great Britain attempt to also filter content that’s legal in real life, like gambling.

Australia implies one of the most restrictive Internet policies of Western nations, states the ONI report. Australia’s government set up an entity which can take down websites offering offensive content, the Australian Communications and Media Authority (ACMA). As soon as offensive content is found on websites hosted inside Australia, ACMA issues a take-down notice to the ISP, which then has to take this content down.
Furthermore, government promotes and finances an “opt-in” filtering programme: Users can voluntary accept filtering software that blocks offensive content of websites coming from outside the country.
Telecommunication Minister Stephen Conroy plans an even stricter Internet filtering programme: Basing on a blacklist of URLs, the websites on this blacklist should be blocked for all Australians. But recent trials showed that also non-offensive content was filtered accidentally, for example the website of an Australian dentist.
The planned Internet filtering is also criticised by ISPs that fear that the Internet performance could be hit.

While the European Union tries to harmonize the telecom market and sets up common laws for all member states, a global action to imply the principle of Net Neutrality is still missing. Participants of the World Information Summit and its follow-up, the Internet Governance Forum, pledge for a global entity to ensure a neutral Internet Governance.
But it also remains unclear, which institution should play the part of this neutral entity. Some researchers argue that ICANN is not neutral enough, after the association refused to accept an xxx-top level domain for pornographic content. So, who should be the global watchdog? Should it be ICANN nevertheless? Should it be a completely new institution?