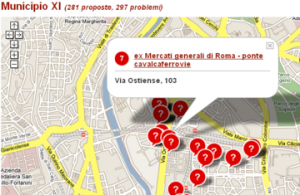 The D.E.P.P. association, is proud to be part of the Pep-Net group and we are culpably starting to post on the blog only today (after severe reprimands by the organizers).

D.E.P.P. (https://www.depp.it) is a non-profit organisation, based in Italy, that has been active in the last few yars both in the fields of partecipatory budget and of transparency.

In this first post I would like to describe the eDem project, which regards the partecipatory arena.

Back in 2004, D.E.P.P. won an Italian Government call on e-democracy, reaching the 4th position among 56 financed projects, and realized the eDem project, involving a number of local administrations, among the others: one of the local Municipalities of Rome.

The project revolved around a quite simple Web2.0 site, that allowed citizens to post problems and propose solutions and have them emerge by an integrated rating and commenting mechanism. An online discourse and continuous voting implementation, substantially.

Problems and solutions were categorized along two dimensions: territories and themes; the themes mainly regarded the array of issues addressed by the paricular partecipatory budget process already in place within the particular administration involved.

The web site aimed at becoming a tool for the integration of offline partecipatory budget processes with online ones, in order to shorten the gap with those segments of population tipically not involved, nor reachable in this kind of traditional partecipatory activities, i.e. students, minorities, families, busy commuters and so on.

To this end, the same crew of enablers that used to work in the offline discussions, were trained to use the platform. Offline discussions were reported in the web site, and the emerging problems and proposals on the site were reported back to local assemblies. The final votations were held offline, but the best-rated online proposals were admitted to the votations as well.

eDem was completely implemented using open source tools, with the collaboration of the National Research Council and is, as of today, available as a zip file, on the web site of the Domotics Laboratory of the CNR.
Mind the gap, though, you hackers out there, the code is open and free, but it lacks documentation.

The same source code was used to implement four different online partecipatory platforms, with different territories, thematic sections and communicational features, so it has fullfilled the requirement to be re-usable, which was explicitly requested in the 2004 call.

The final outcome of the project cannot be defined as a success, though. The number of total subscribers in the case of the local Municipality in Rome was 250, out of a total population of over 150′000. The total number of offline partecipants, though, was about 400, making it clear that it was not a tecnology barrier issue, but a precise political one.

There were no further fundings coming out of the italian government on e-partecipation, at least at a national level.