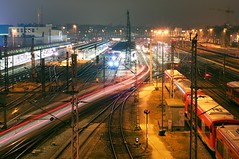 Starting today (5th July 2011), citizens in the German city of Ulm are invited to take part in a discussion on the redevelopment of the central station. The online discussion platform, developed by DEMOS Gesellschaft für E-Partizipation mbH, will be online until 29th July.

The first building block of the Citybahnhof concept will be the development of a new concept for the central station itself, which will involve the participants in discussing which aspects they feel are important in terms of design and transport connections to the city centre. As well as the more detailed subject matter, there are more wide-ranging issues which citizens can discuss and make suggestions about; for example the organisation of the new central station, the public transport hub at the station, getting to and from the station as well as spatial planning aspects.

The basis of the disussion will be nine draft designs. The redevelopment of the central station is possible in the medium term and the rest of the area will follow in subsequent years and will be the subject of further consultation exercises.

How’s your German? You can take a look at the site at: www.ulm-citybahnhof.de