Brussels, November 2010 –The Flemish Government and a host of European local government partner organisations have launched an open online consultation to encourage local eGovernment practitioners across Europe to help identify practical solutions to combat working barriers to eGovernment at the local level such as bureaucratic red tape, cultural resistance and divergent privacy and data protection laws.

The objective of this effort is to produce a pan-European ‘Call to Action’ – known as The Citadel Statement – that will help local government deliver on the key objectives of the Malmo Ministerial Declaration by identifying the top things that national and EU decision makers can do by 2013 to better support local eGovernment. Initial research shows that despite numerous policy documents and ‘how to’ manuals on local eGovernment, nearly one year on the ‘Malmo Vision’ is still not being translated down to the on-the-ground, local level.

The online consultation will close on November 5.  Join in the consultation now and help ‘Make Malmo Real’ at the local government level: https://egovstatement.wordpress.com

The Citadel Statement will be formally launched at the Belgian Presidency’s forthcoming ‘Lift Off Towards Open Government’ Conference on December 15-16.   The Flemish Government invite practitioners from across Europe to the site of the old Ghent Citadel on December 14 – the perfect place to launch an ‘Ideal Cities Statement,’

The long awaited CIP project ‘Puzzled by Policy’ developed by 21c kicked off in Athens this October with our team represented by Susie Ruston. Project partners from across Europe including Slovenia, Portugal, Hungary, Greece, Italy, Netherlands, Spain, Ireland and the UK met at the offices of GRNET (Greek Research NETwork) to discuss how to end general citizen detachment and disillusionment in policy making processes using innovative policy profiling and argument visualisation technologies. The aim of the project is to provide all citizens – regardless of their literacy skills or subject matter knowledge – a unique platform/portal to learn about immigration policy at the EU level and find out what particular policies mean to them on a national level, so they can contribute to the drafting of a common EU immigration policy. Equally important, Puzzled by Policy will help decision makers at both the national and European level better understand the impact of their policies on constituents by feeding citizen reactions back to them. Further information about the project will be provided here soon.

The Kingdom of Bahrain has recently moved from 42 to 13 on United Nation’s 2010 Global eGovernment Survey and is keen to build on this achievement through their upcoming five year strategy. To design the most effective approach, the Bahraini key eGovernment Authority representatives have asked 21c Consultancy to host a Study Tour to meet with leading UK figures involved with implementing eGovernment.

For the 17th and 18th of June 2010 21c has arranged personal meetings with high dignitaries within the UK ICT central and local departments starting on the 17th with a presentation by the Deputy CIO at the UK Cabinet Office on the UK eGovernment Strategy followed by a visit to the Local Government Information Unit where the Head of Children and Social Services, presented their approach to Web 2.0 and Service Delivery. The delegation had also a chance to visit the Department of Health and learn about the NHS Choices programme and meet Bob Gann the department’s Head of Strategy & Engagement.

The second day was devoted to local government strategy and the delegation travelled to Kent County Council to visit the leading centres for innovation in digital service delivery. The delegation was introduced to a wide array of award-wining digital initiatives, including Kent TV and ‘Pic n’ Mix’ Innovation.

The entire delegation found the information and knowledge presented enriching for the development of the Bahraini eGA 2011-14 strategy.

The OurSpace project, selected as one of the top proposals from the last ICT PSP call, has officially kicked off on the 23rd of July in Athens. The meeting was organised on the premises of NTUA by the project coordinator – the Athens Technology Centre – who will lead the OurSpace consortium for the next 3 years.

OurSpace plans to create a unique online collaboration space designed to actively engage young European citizens in the moulding of their future society. The platform will incorporate all the latest social media tools and applications and will be designed with help of the end-users themselves to ensure high attractiveness and usability of the platform.

The project success will not depend only on the technical delivery of the platform but mainly on the high participation rate of the end-users and OurSpace consortium has on board partners such as UK Youth Parliament, Café Babel Magazine or Google Ireland with links to millions of young people from Europe so we all hope that OurSpace will be a success story!

Do you ever wonder if eGovernment will lead to a new form of democracy or if eGovernment can survive without eTrust? Or do you care who owns data about you; the government or you? If yes, then is time for you to join the debate!

The World Congress on IT (WCIT) 2010 which will take place in Amsterdam 25-27 May has prepared an online debate where thought leaders, including Dr. Julia Glidden the founding member of Pep-Net, will debate with their counterpart on questions that concern us all.

To participate go to https://virtualspace.nclude.us/, select the theme you want to discuss. You can choose from six themes including: ICT-revolution vs ICT-challenge, Open Source or The information society.

So if you think you have something to say about these themes or just want to know what the thought leaders of eGovernment think, visit the WCIT2010 website and start the debate!

London, UK. April 2010 – Web 2.0 and environmental activism join forces on Earth Day 2010 (April 22nd 2010) when a pioneering new social medial tool makes it easier than ever before for UK citizens to participate in a global day of action conversations.

For Earth Day 2010, WAVE, a European Commission initiative, is launching a unique, visually enabled debate forum specifically dedicated to climate change. The forum, which is free of charge to all users, will use ground breaking graphical techniques to enable everyone, regardless of their level of knowledge, to exchange views on complex climate change issues.

“This is a new era for debate,” said Ken Bellamy, Director of the AIDC Centre of Excellence and founding partner of the WAVE project. “We are shaking up the traditional online forum to create a truly dynamic environment for discussion that allows people with opposing views to see and respond to each other’s arguments”.

“WAVE aims to harness the power of collaborative action to help give individuals and communities a voice on the climate change issues that matter to them”.

The results of the discussions will be shared with politicians across Europe to help them make better informed decisions on climate change measures.

As Robert Sturdy, MEP for Eastern England stated “Climate change is not going away and we must prepare ourselves for whatever the future may hold.  …[C]itizens should pay a central role in formulating policy”. Sturdy urged project WAVE on: “I would like to encourage your work and hope that it will be of use to the Commission in particular, and the European Union in general.”

The eCitizen 2.0 project funded by the InterReg IV Call officially kicked off on the 16th of February in Tampere, Finland. eCitizen 2.0 is a follow up of Interreg 3C funded Challenge of eCitizen (2005-2007) which promoted interregional collaboration on eGovernment development. eCitizen 2.0 led by the Baltic Institute of Finland brings together 11 Local Authorities from four regions of Europe to stimulate new Web 2.0-inspired approaches to citizen-centred and driven service delivery.

Over the next three years partners will regularly meet in joint seminars to discuss key issues, challenges and opportunities in eParticipation and will explore the designated sub-themes for the end-of-project online manual on eParticipation. Partners will also be exposed to state-of-the-art development in eGovernment on their Study Tours across Europe. The project is designed to enhance direct collaboration and peer learning between more and less experience project partners.

We still have a long way to go before governments become 2.0 savvy. Recent report published by McKinsey & Company got it spot on!

According to the report and from our experience, in recent years we have seen a significant improvement in the use of information and communication technology by central and local governments. Majority of governments have websites and offer certain public services online such as paying tax, paying for parking tickets or renewing personal identification documents or driving licences. Moreover, public service employees use the internet on regular basis to communicate and to manage other resources.

These improvements were made possible thanks to significant spending by the governments; however, the public sector services still lag far behind the private sector. Many funding schemes designed to transform the government failed, and the benefits are not immediately obvious. Citizens are increasingly more demanding as the use of ICT and social media by private companies is highly advanced and the private sector standards are seem far from reachable by the public sector.

The report points out three main obstacles that decrease the impact of ICT modernisation funded by the public sector: ‘ineffective governance, lack of Web-related capabilities, and reluctance to allow user participation in the creation of applications and content’.

I personally agree with the last point the most. Local authorities are fearful to allow citizens co-create their website or to post blogs expressing their concerns and many believe that council’s website is an official informative source and should not be transformed into a place of discussion and Facebook/Twitter debates. I agree that we don’t want to see offensive postings when we are looking to pay our parking tickets, however, having a space where I can say what I think would help my neighbourhood would come often very handy. So where is the limit and how to overcome this problem?

After a successful opening of the French pilot on the 16th of October with the Sofia Café event in Sofia Antipolis the UK pilot opened its site for argument visualisation pioneers on the 13th of November.

The Wave project tests a state-of-the-art argument visualisation tool in three pilot sites – France, Lithuania and the UK – by inviting climate change enthusiasts and – during the test stage – local residents in selected regions of the pilot countries. Users are asked to read opinions of others and express their views on climate change issues such as the development of wind farms near London. Discussions are portrayed on the colour coded argument visualisation map allowing people to easily follow the flow of arguments. The results of the discussions will be feed back to government decision makers to ensure each opinion is heard. 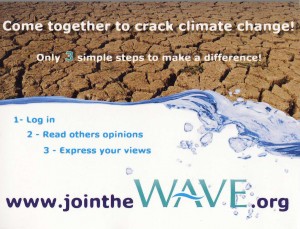 If you want to be part of it or just want to have a look, please visit www.jointhewave.org

Just 100 days before the Copenhagen Climate Change Conference, Fondation Sophia Antipolis, a partner of the WAVE project, will be hosting a breakfast meeting entitled:

Reduction of Greenhouse Gases:  How to Intensify the Efforts?

The breakfast aims to:

The WAVE project co-funded by the European Commission – aims to improve the inclusiveness and transparency of EU decision making at the national and European level by using highly integrated, state-of-the-art Argument Visualisation techniques to make the impact of complex EU environmental legislation on climate change more accessible and easy to understand for citizens, special interest groups and decision makers alike.