It’s not surprising that any kind of a project has a set of risks that can impair the project’s results. eParticipation projects can be especially exposed to a number of various risks, ranging from poor platform developments, which don’t meet users’ requirements and preferences, to inadequate communication strategies.

Therefore, developing a risk management plan in the early stage of a project is crucial. It allows to identify certain risks, to analyse them and to develop early strategies and solutions that will help in either minimizing their impact on a project or completely avoiding them.

However, the identification of risks at the beginning of a project is not enough, because additional risks might arise during the duration of the project or the proposed solutions and strategies to overcome them might prove to be ineffective. Thus, a continuous tracking and control of such risks is very much desirable. In this respect, the Continuous Risk Management (CRM) paradigm developed by the Software Engineering Institute (SEI) of Carnegie Mellon University (https://www.sei.cmu.edu/risk) can be a valuable strategy. It doesn’t only allow for continuous risk identification and management, but it also helps in assessing risk exposure by combining the impact and probability of the risk.

Posted in experince | No Comments »

Argument visualisation might not be seen as a suitable tool for eParticipation at first sign. However, when properly deployed, it can serve as a useful tool for eParticipation projects, where citizens can engage in stimulating brainstorming, exchange of information and knowledge, as well as in active involvement on the issues in interest.

An example of such deployment of an argument visualisation tool in an eParticipation project can be found in the WAVE Project. WAVE aims to improve the inclusiveness and transparency of EU decision making at the national and European level by using highly integrated, state-of-the-art argument visualisation techniques to make the impact of complex EU environmental legislation on climate change more accessible and easy to understand for citizens, special interest groups and decision makers alike.

WAVE has deployed Debategraph as an innovative argument visualisation platform, in a multi-lingual, cross border context. The project has launched 3 pilot websites in the UK, France and Lithuania where the tool is being tested and where the citizens engage in stimulating discussions on the environmental issues relevant to their countries and local communities. Each pilot has its own portal and argument visualisation mans in the national language, making it possible for every citizen to actively engage in the discussions.

MOMENTUM launched in January 2008 and was designed to last for 30 months (until the end of July 2010). The Project aimed to monitor the existing and on coming eParticipation projects co-funded by European Commission, to consolidate their results and to provide feedback to them and to the respective EC bodies and other designated stakeholders, advancing the high-level political and institutional engagement.

Despite MOMENTUM reaching its conclusion, the website will be kept online for anyone wishing to use the resources available there.

WAVE will participate at the 2nd International eParticipation Conference that will be held between 31 August and 2 September 2010 in Lausanne, Switzerland (https://www.demo-net.org/epart).

Specifically, the first day of the conference WAVE organises a workshop titled “On the Use of Argument Visualisation Tools to support Policy Formulation”. Apart from presentations and discussion, hands-on exercise on the WAVE platform will also be offered during the workshop for elaborating on EU policies relevant to climate change.

Moreover, the second day of the conference a scientific article on WAVE’s technical details will be presented. The article’s title is “Integrating Argument Visualisation Tools in Social Platforms to Facilitate Online Political Debates: The WAVE Platform” and is authored by the following members of WAVE consortium: Deirdre Lee, Yojana Priya, David Price, Efthimios Tambouris, Vassilios Peristeras and Konstantinos Tarabanis.

eMPOWER is an eParticipation Trial Project co-funded by the European Commission under the EU eParticipation Preparatory Action. eMPOWER aims to motivate and strengthen the involvement of NGOs and citizens in the decision-making process on environmental issues at a national and the European levels by providing tools for supporting citizens’ participation and collection of signatures to promote relevant public initiatives and demands of civil society through ePetitions.

Therefore, eMPOWER is a very unique project, which in fact combines 3 domains: (1) eParticipation, (2) ePetitioning and (3) environment. But this is not the main reason why eMPOWER is so distinct.
Environmental issues have become one of the most important topics and problems in the last decade. In addition, the global environment will become the most significant global issue within this century. Consequently, the environment will, or rather already is, an important public policy matter. However, it is important at the same time to realize and introduce policy-making from a new participative and eParticipation approach. Policy-making have been undergoing slow but strong modifications from top-down to bottom-up policy-making scheme. Therefore, citizens are given various tools at their disposal to influence and propose new legislations, eMPOWER and its ePetitioning tool being one of them.


Posted in Projects | No Comments »

On April 22, during the Earth Day 2010, the WAVE Consortium proceeded to the official launch of the second phase: the objective today is to reach 6,000 users over Europe. The first phase gathered more than 300 users in the pilot countries: France, Lithuania and England.

The ultimate goal for all the partners is to create a community of users and debaters in charge of testing online the WAVE platform and its innovating tool: Debategraph. This forum will use ground breaking graphical techniques to enable everyone, regardless of their level of knowledge, to exchange views and debate on complex climate change issues.

The WAVE Project will end in January 2011, after which the European Commission will decide whether this tool is efficient among others and if it should be used more intensively.

Climate change is one of the most challenging and most serious phenomenons which we must face today. Therefore citizens, special interest groups and decision-makers are invited to mobilize and subscribe, free of charge, to the following websites:

eMPOWER participated in the workshop organized by MOMENTUM (a Support Action to the eParticipation Project co-funded by the European Commission) on 6 May 2010 titled ‘EU eParticipation Prepatory Action: Results & Future Directions’ during eDEM10 (4th International Conference on eDemocracy) in Krems, Austria. 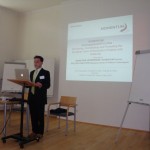 The European eDemocracy Award is a well-established and international annual award prepared and coordinated by POLITECH INSTITUTE (European Center of Political Technologies) [www.politech-institute.eu] in the framework of the World eGov Forum [www.edemocracy-forum.com], organised by André Santini, former Minister, Deputy of Hauts-de-Seine, Mayor of Issy-les-Moulineaux, France.

Would you like to apply? Maybe you know one that should be considered for the award? Then send a short summary of the initiative in word format and the link to it to info(at)politech-institute.eu before 18 June 2010!

ePetitioning represents a key to eParticipation and eDemocracy services. Therefore, the European Commission is currently co-funding two projects under its eParticipation Preparatory Action: EuroPetition (www.europetition.eu) and eMPOWER (www.ep-empower.eu). However, the main problem with creating pan-EU eParticipation services, such as ePetitioning systems, is interoperability between the different eID systems amongst the Member States. It is of great importance to develop a reliable method of identification for ePetition in a cross-border context such as in the EU. As simple online identification in which only a name and e-mail address are required, are not sufficient for an ePetitioning process responding to the requirements put forward by under the article of the Lisbon Treaty referring to petitioning the European Parliament (Article 11 of the Consolidated Version of the Treaty on European Union as amended by the Lisbon Treaty).

Although the EU is currently running various cross border eIDENTIFICATION (eID) trials, there is no pan-European framework yet. In fact, implementing such framework poses several issues of interoperability between eID systems put in place by the different Member States, such as the Belgian eID is not interoperable with the Austrian one. Therefore, the issue of interoperability between Member States is crucial to create efficient pan-EU identification process enabling the provision of EU-wide eParticipation services. Several pilots, such as the STORK project (Secure Identity Across Borders Linked), are currently funded by the European Commission to solve this important issue and enable not only the provision of pan-EU services in the framework of the EC Service Directive and eGovernment, but also in regards to cross border eParticipation services, such as e-Petitionning. Such example shows how eGovernment developments are crucial for eParticipation processes and development.

WAVE (Welcoming Argument Visualisation to Europe) is an eParticipation Project co-funded by the European Commission and designed to improve the inclusiveness and transparency of EU decision-making at national and European levels, focusing on the issues of climate change and environment.

The Pilot Websites of the Project have been launched in the UK, France and Lithuania on 16 October 2009, 13 November 2009, and 10 December 2009  respectively. They can be accessed by going to the following websites: 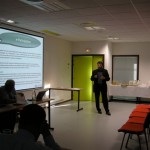 WAVE was pleased to have an opportunity to present the Project to the audience of 81 event participants and to listen and discuss the ideas and feedback after Laurent Soulier’s (Director of International Relations & and European Affairs at Foundation Sophia Antipolis), David Price’s (Debategraph) and Deirdre Lee’s (DERI) presentations on WAVE and Debategraph, which is a tool used by WAVE.

Posted in Projects, Tools | No Comments »