At the moment I am visiting the Gartner Symposium in Cannes which runs till Thursday, November 5th. All together I have the chance to visit nearly 500 sessions and workshops in four days. On the first day I was concentrating on the topics “social software”, “collaboration” and “web 2.0”.
Nikos Drakos and Gabriel Zany from Gartner started with the workshop “Getting what you need from the social software vendors” and Andrea di Maio, leading analyst for the public sector within Gartner, spoke about “From citizen-centric to citizen-driven and employee-centric government”.

At the workshop we worked in smaller groups concerning on the target groups “teams”, “community (internal)”, “network (internal)” and “external network/community”. Although we were broad mixture of people from different companies (most of them), scientists/universities (less) and administrations (very few), we found out that we work on the same challenges.

END_OF_DOCUMENT_TOKEN_TO_BE_REPLACED

It’s almost exactly a year ago since I was at the “Neue Verwaltung” (“new administration”) conference in Leipzig and described my impressions here of how eParticipation was faring in Germany’s public administrations. The verdict in a nutshell was: there’s a fair amount on offer to executive staff from German administrations – the conference’s main target group – but the take-up has been pretty slow to date.

Today, even though the year’s still relatively young, the invitations and advance notifications for the major administrative conferences in Germany in 2009 are already fluttering one by one into my inbox. Is eParticipation in all its facets on the agenda more often or in other ways than it was last year? I’ve had a look at the four biggest German eGovernment congresses with that question in mind. After all, that’s where you’re likely to find a throng of representatives – important ones, too – of all of the German administrations, whether at national, federal state or small local authority level.

Let’s start with CeBIT 2009, which took place in early March in Hannover and which 43% of respondents in a survey of representatives of public administrations said was the IT exhibition they visited most. It was certainly interesting to see with my own eyes how, against the backdrop of the financial crisis, the Public Sector Park was experiencing an upturn that the public administration sector itself would never have thought possible, considering how it’s struggled for years to present its services from – to put it diplomatically – a less than favourable corner of the whole CeBIT site.
This year, visitors walked through many of the so-called “business halls”, where there was lots of empty space and exhibitors with plenty of time on their hands, to reach Hall 9, where it was really buzzing. So there was a good audience for a presentation of the eParticipation activities of the German public sector. But you looked in vain for anything from the federal states. The Federal Ministry of the Interior had at least allocated two of the slots in its lecture programme to the subject, each with three talks covering various areas.

I gave a talk there on Hamburg’s experiences in the field (eParticipation in Hamburg from 2002 – 2009: from a pilot project to the norm), while Matthias Trenel from Zebralog e.V. spoke about federal and other administrative discourses. PEP-NET coordinator Rolf Lührs chaired a discussion between leading politicians on the topic of “Politics 2.0” as part of the “Webciety” series.

On 5 – 6 May 2009, the “Neue Verwaltung” congress organised by the dbb-Akademie was due to place again in Leipzig. As last year, it was offering practical workshops on the topic of “Web 2.0 in public administration” and at least dedicating one of nearly 40 lecture slots to the topic of eParticipation. Entitled “eDemocracy, eParticipation and Web 2.0 – online public participation”, it promised to offer representatives of public administrations a chance to find out about new ways (to them) of applying IT. That sounds really promising and gladdens the innovative civil servant’s heart.

On 26 – 27 May 2009, the 12th “Effizente Staat” (“efficient state”) conference will be taking place in Berlin under the banner of “Change Requires Exchange”. According to the organisers, the magazine “Behörden Spiegel”, the event “has become an integral part of the transformation discussion”. If that’s the case, German administrations aren’t transforming themselves in the direction of more eParticipation, since the topic isn’t to be found anywhere.

The fourth major administration conference traditionally takes place in Berlin in the autumn: “Moderne Staat” (“modern state) whose partners include the Federal Ministry of the Interior and the KGSt (Kommunale Gemeinschaftsstelle für Verwaltungsmanagement – a federation of German municipalities and district and local authorities of all sizes concerning local management). According to the advance programme, the main focus in the eGovernment area will be on the topics of “the EU Services Directive” and the “Germany-wide common telephone number for public enquires“.

My personal verdict is that the topic of eParticipation is making up a bit of ground in the public administration community, but its significance lags way behind that of topics such as the “EU Services Directive”, IT infrastructure, IT security, IT cooperation or shared services. These are all doubtless important topics when it comes to being well equipped for the future.
Does the dominance of the classical IT topics perhaps have to do with the fact that “the internal IT departments in local authorities (…) frequently tend to fulfil the role of a simple operator, exerting little influence on how departments actually use IT”? This is what emerged from a survey conducted by the market research and consultancy company IDC in the autumn of 2008 among those responsible for IT in metropolitan authorities and rural administrative districts. They add: “In future, however, IT will become even more important for the successful structuring of administrative processes and a greater responsiveness to the needs of the public”. It is to be hoped that the message will not fall on deaf ears and that it will be given enough space. 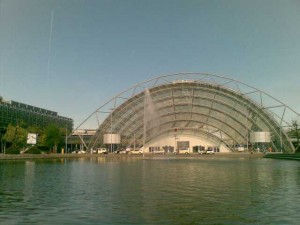 The first surprise was that there were only five members of public administrations sitting in front of their PCs and busily practising constructing blogs and using administrative tools to put them into practical use. Two participants were from the same organisation, and one had to leave early because his boss called him away. That left just four administrations at this conference that had expressed any interest in using this no longer terribly new method of interaction. END_OF_DOCUMENT_TOKEN_TO_BE_REPLACED