Only articles in with the "Web 2.0" tag are displayed 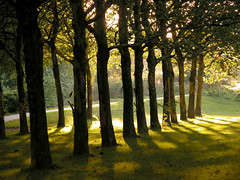 Every morning, on my way to the underground station, I walk down a nice tree-lined lane. I think the trees feel a little taken-for-granted, though: almost all of them have some kind of banner crying out to the world how valuable they are. Slogans like “night-time owl sanctuary”, and “I filter the air!”

As a quick internet search reveals, this is all part of a protest against the local government’s plan to fell the trees. You can see a video of “Tree Night” (Nacht der Bäume), which took place on 30th September last year, on YouTube.

It seems that trees are an issue that not only Hamburgers care about: I noticed a recent article about trees that have been removed and not replaced on the Bournville Village community website. The article also contains a YouTube video, this time of a resident explaining the situation.

Both cases are examples of concerned citizens using social media, on their own initiative, to highlight local issues that are important to them and campaign for change. If you have any more such examples of “hyperlocal” media, let us have them!

“Nacht der Bäume” has a website all of its own (in German), as does the “Bürgerinitiative” (citizens’ action group) for Emil-Andresen-Straße. All in German, of course — that’s hyper-local for you!

For information on what “hyperlocal” means, including links to many example sites, take a look at the UK-based talk about local website.

The Eurodoc is a conference providing a framework for young European researchers from multiple disciplines. The annual meeting took place in Vienna from March 11-15, 2010. Young researchers from all over Europe were meeting to engage in interdisciplinary communication, networking and workshops. One of them, “Science 2.0″, was dealing with opportunities to carry out research activities in the open from the very beginning.

The workshop was lead by Daniel Mietchen, a biologist who is striving to do his research and teaching in the open as far as possible.

While scientists have gloried in the disruptive effect that the Web is having on publishers and libraries, with many fields strongly pushing open publication models, we are much more resistant to letting it be a disruptive force in the practice of our disciplines. (James Hendle)

Although scientific research is a collaborative endeavour which would greatly benefit from such direct interactions between participants, few researchers have started to explore the possibilities of the Web in areas they are not familiar with. The workshop addressed how science would look like if researchers would be less resistant to the new opportunities. Web 2.0 should be combined with scientific methods and many such combinations are currently being explored. Of special interest are those who allow to make the research more widely accessible.

END_OF_DOCUMENT_TOKEN_TO_BE_REPLACED

Much focus has been on Web 2.0 technology as an enabler for wider dissemination, awareness raising and not least participation and transparency. It is therefore interesting to see that Web 2.0 technologies are being used in various ways for a range of purposes in this year’s 5th Ministerial eGovernment Conference, 18-20 November, in Malmö (Sweden) and 4th European eGovernment Awards.

The plenary sessions and three of the parallel sessions at the Ministerial eGovernment Conference will be webcast live and on demand this year from the conference website www.egov2009.se. In addition the ceremony for the 4th European eGovernment Awards will most likely also be the subject of a webcast.

The programme is available on www.egov2009.se/programme

The online voting for the European eGovernment Awards Public Prize was therefore launched late this summer and closed on 11 November at 18:00 CET. Members of the epractice.eu community have been able to vote for their favorite cases from among the 52 European eGovernment Awards 2009 finalists.  The online vote is in addition to other ICT initiative by the awards consortium and the European Commission for a fully electronic submission process via www.epractice.eu and the remote evaluation of the received submissions by the jury in the first phase of the evaluation.

The voting is now closed but the 52 finalist cases remain published at ePractice.eu and are open to receive members’ comments.  The winner of the Public Prize will be announced at the awards ceremony on 19 November at 18:30 – and likely to the subject of a webcast.

For the first time the European eGovernment Awards finalist are accessible online through a virtual exhibition. The virtual exhibition can be visited on www.expopolis.com (NB: for practical reasons you have to register). Naturally an electronic version of the conference exhibition catalogue will be available on www.epractice.eu/awardsmediakit as of 19 November when the Ministerial eGovernment Conference and Exhibition opens.

A ministerial tour of the European eGovernment Awards Finalists stands will take place on 18 November 2009 at the Ministerial eGovernment Conference and Exhibition.

To enhance the promotion of the European eGovernment Awards Finalists 2009 17 country factsheets from those European countries from which finalists have been selected for the European eGovernment Awards 2009. The factsheets are published in English but will be made available in the relevant national languages in the beginning of November. The fact sheets are available with other dissemination material on www.epractice.eu/en/awardsmediakit

Barack Obama’s electoral campaign represents a masterpiece in online-campaigning. The use of ICTs and the creation of an Obama-brand were the key features to mobilising the masses. Obama’s opponent, senator McCain, couldn’t motivate as many people to participate in his campaign.

Barack Obama was registered on more than a dozen different social media, the main ones (Facebook, MySpace, YouTube, Twitter) included, and succeeded in forming an online community that strongly supported his goals. The online-headquarter was my.barackobama.com (MyBO) “[which] was at the heart of the campaign’s new media strategy. [… The] site allowed users to create events, exchange information, raise funds, and connect with voters in their area. MyBO was the digital home from which the campaign could mobilise its army of supporters.” [2] This portal helped creating a community with more than two million profiles. Of course, the easy-to-use website also attracted adversaries, which made community managers essential to evaluate and delete certain statements if necessary.

The operators of MyBO established a strong sense of community as everyone with political interest could participate. In blogs, people could express themselves and report about their personal experiences during the campaign. Useful information, such as phone lists and guides for campaigning, were distributed via this internet-portal; even fund-raising-statistics of all members were included. However, the “real spirit of the community could be seen in the more than 200,000 offline events organized through MyBO.” [2]

The Obama campaign collected 13 million email addresses and sent one billion emails to mobilize its supporters. “The Obama team used email as an integral platform to engage supporters, bloggers, and online media. Often overlooked by traditional communications departments, email has one major advantage: speed.” [2] Putting email recipients into groups gave the campaign the opportunity to send individually designed messages to specific groups of people. An even faster way to communicate is SMS, which can be used to contact people without internet access, especially in rural areas.

END_OF_DOCUMENT_TOKEN_TO_BE_REPLACED

The project is promoted by the Emilia-Romagna Region in the framework of its Telematic Plan, and realized by the Municipalities of Bologna, Ferrara, Modena, Piacenza and Reggio Emilia. The aim of the project is to understand, both with studies and analysis, both with tests, how much and in which ways institutions can integrate web 2.0 tools in their official websites and portals. Leda Guidi, manager of the Bologna’s institutional civic net Iperbole and Power’s project manager, highlights goals, plans and early results of the project. END_OF_DOCUMENT_TOKEN_TO_BE_REPLACED

Each of the main parties makes use of ICT in some form and in variety of ways and degrees. The table below outlines the use of websites and social networks (or Web2.0 technologies). END_OF_DOCUMENT_TOKEN_TO_BE_REPLACED