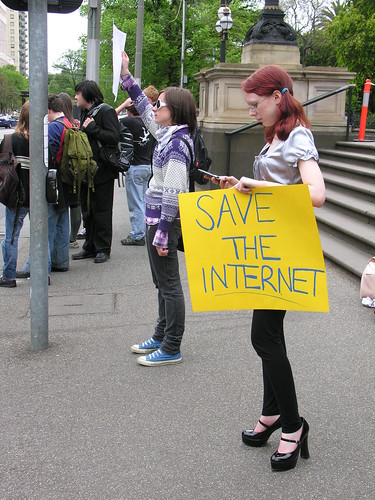 Photo by squirmelia on Flickr.com

The European Commission started its consultation on net neutrality the other week, which it promised as part of its Digital Agenda for Europe. According to the document,

“Concerns have been raised that the openness of the internet, and therefore its benefits to society and the economy, may be undermined if network operators seek to treat traffic differently, for example on the basis of its origin, destination, the type of service or content that is being transmitted, or other criteria.”

Written comments and questions can be submitted until 3oth September 2010. Of particular interest to PEP-NET readers will be the very short section 4.5, “The political, cultural and social dimension.” Question 15 asks “… are there any other concerns affecting freedom of expression, media pluralism and cultural diversity on the internet?”

The paper describes two models for a future internet: the current “best efforts” model, where traffic is largely routed as quickly as possible under the circumstances but with no cast-iron guarantee of service quality, against a managed network whereby customers would be able to pay a fee to get a guaranteed service quality or buy packages that guarantee higher speeds for information and services from certain sources. Some examples of a managed network seem fair enough, and exist already: prioritising voice calls over data in order to ensure everyone has a working telephone; prioritising critical applications like emergency services over every-day use.

In my opinion, differentiating between what people use the internet for beyond that is problematic. Even the argument that some applications, say watching high-definition video, require more bandwidth than others is dubious because surely it is possible for a service-provider to allocate a certain amount of bandwidth to each customer so that the customer can decide what to use it for?

But my main concern is that — even in a competitive environment, where no service provider has a monopoly — non-neutrality could continue to tighten the screw on an internet that is already criticised for being an echo chamber: for example on Twitter, it is all too easy to follow people you agree with and unfollow people whose views you dislike; another example is the self-reinforcing effect of product suggestions based on customer profiles on sites like Amazon and Genius on iTunes. They are great for finding things that you will probably like, but not necessarily for broadening your horizons.

So imagine if you had the choice: a cheap internet package with fast, reliable access to the news websites you read anyway, or a more expensive one with reliable access to everything. This could mean a future internet that is more about getting access to things you already like rather than broadening one’s horizons and opening oneself up to new ideas an influences.

What do you think? Is net neutrality relevant to eParticipation on the ground, or is it more of a technical issue that doesn’t affect the average Joe?