We kindly invite you to submit a paper to this year*s CeDEM – Conference for E-Democracy and Open Government. The conference will be held in Krems, Austria, 22-23 May 2013. The submission deadline has been extended to 5 February 2013.

Topic:
The Internet was always connected to a vision of a participatory society. There is the idea that the new medium would produce politically better informed citizens and that that would lead to greater citizen participation. However, skeptics believe that the barriers between the individual and the political public sphere are not technical but social in nature and therefore cannot be repealed by online technologies. Today we are still somewhat between the highly technical deterministic and technical indifferent position. With the social web new opportunities developed and they are used by civil society organizations as well as by political parties and by governments and administrations – from e-petitions to adhocracy, from wikis to open data. What works? Who participates? How can people be mobilized online? What impact do the new online tools have on political communication, on political decision-making and on the political system itself. That is the subject of this conference. We will look at the political online participation from different perspectives, from the civil society side, bottomup, and from the sides of politics, top-down. The conference will not only focus on and discuss scientific results but will also try to build a bridge between science and practice in order to share knowledge and experience. Therefore scientists and representatives from civil society organizations, parties, administrations etc. are invited.
Conference language is German, translation cannot be provided. 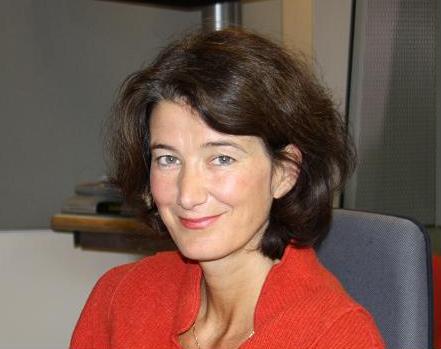 Prof. Patrizia Nanz is Professor of Political Theory at the University of Bremen and a founding member of the European Institute of Public Particiaption (EIPP). She will be delivering the keynote address at the upcoming “PEP-NET Summit: Out in the Open” event on 14th May 2012.

Patrizia has been conducting research into the future of democracy for over ten years and is known across Europe as an expert in civil society participation and engagement. In March 2012 the Bundeszentrale für politische Bildung (Federal Centre of Political Education) published her handbook on participation, Handbuch Bürgerbeteiligung. Verfahren und Akteure, Chancen und Grenzen.

Patrizia studied Philosophy, History and German Language and Linguistic Studies in Munich, Frankfurt and Montreal as well as Political Science at the European University Institute in Florence, and was a Fellow at the Institute for Advanced Study in Berlin.

The European Comission published a call for tender to implement an European Commission Open Data Portal.

The purpose of this tender is the purchase of services:

- to assist the Commission with the definition and implementation of a data set publication process;

- to assist the Commission with the preparation of data sets for publication via the portal;

- to assist the Commission in supporting for engaging the stakeholders’ community interested in re-using the published data sets.

We have extended the deadlines for the call for chapter proposals for our book Sustainable eParticipation:

Researchers and practitioners are invited to submit on or before August 31, 2011, a 2-3 page chapter proposal clearly explaining the scope and contents of their proposed chapter. Authors of accepted proposals will be notified by September 15, 2011 about the status of their proposals and sent chapter guidelines. Full chapters are expected to be submitted by October 30, 2011. All submitted chapters will be reviewed on a double-blind review basis. Contributors may also be requested to serve as reviewers for this project.

The “eParticipation” workshop is an initiative supported by the European Commission, Information Society and Media Directorate-General and will take place in Brussels, on 07 December 2010.

It  aims to bring together experience and practices available in the EU and to draw lessons from the variety of projects and engage citizens and civil society alike in debating top level policy issues for the European Union. This event will take place at the right time to place eParticipation on the new political agenda of the EU, while explore its possible contribution to major political reforms throughout the EU.

• eParticipation experiment design: Innovative approaches to the design of eParticipation showcases that demonstrate concrete benefits for the democratic – processes.

• eParticipation tools and services: Practical solutions for eConsultation, ePetition, conflict resolution and mediation, eDeliberation and others.

• Policy issues: How is the eParticipation social and legal landscape formed in Europe and elsewhere? What are the key lessons learned from the projects so far?

• Social Risk assessment: What needs to be considered in order not to undermine the fundamental social requirements associated with Democracy?

For more information for attendees and speaker, please visit the worshop announcement on ePractice. 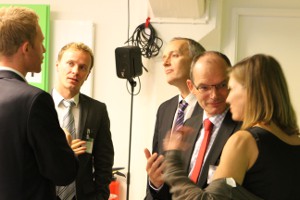 Lively discussion at the PEP-NET Summit

At last week’s PEP-NET Summit we set out to move European eParticipation one step forward.

The diversity of the audience and the broad range of projects that were shown in the presentation corners emphasised again that eParticipation is multifaceted, and that we should move beyond discussing whether or not digital technology can improve participation to thinking of eParticipation as a toolkit with a variety of tools for different purposes. Just as it is no longer enough for digital disciples to set up a free blog and Twitter account in the hope that eParticipation will take care of itself, neither is it right to claim that eParticipation has nothing to offer.

Whether ePetitions, eVoting, discussion forums, online consultation portals, online participatory budgeting or one of the many other eParticipation interventions, each intervention has its own particular purpose. The differentiated approach that I talked about in my speech means thinking carefully about which of these tools best serves your objectives.

This means being open to technological change and the benefits it can bring in terms of efficiency, wider engagement of citizens, and better policy-making; but also being aware of the limitations and how these can be overcome. With the emphasis very much on discussion and networking between the sectors, the PEP-NET Summit was a catalyst in this process.

The summit opened with a welcome address from Bernd Reinert, Staatsrat at the City of Hamburg, who spoke about Hamburg’s experience of successful eParticipation projects. He also gave a compelling account of the history of the Warehouse Quarter in which the Summit was held: the area was once a storage space for spices, carpets, coffee and all manner of imports that would then be distributed to retailers. (I think that is symbolic of this PEP-NET Summit, which took big ideas and high-level policy and unpacked them into smaller, “bite-size” pieces for practical application by end users.) END_OF_DOCUMENT_TOKEN_TO_BE_REPLACED 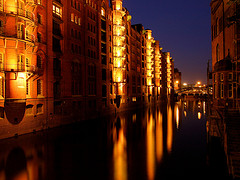 The calm of Hamburg’s historic Speicherstadt is not usually disturbed by anything more than the chatter of tourists exploring the picturesque surroundings in the sun, or a sprinkling of rain sending ripples across the canals. (Here is a nice video as appetizer).

But on 23rd September 2010, we’re hoping to make waves that spread well beyond the canals of Hamburg to the furthest corners of Europe!

As many as four presentations will be running in parallel, allowing you to move from one to the other according to what you find most interesting. It will get loud in there, but that will only add to the lively hustle and bustle and make sure that this is so much more than just another flashy conference.

We’ve got presenters from all across Europe: Germany, Scotland, England, Estonia, Slovakia, Greece, the Netherlands, and Denmark. The topics discussed will range from open government to grass-roots citizen participation in local politics via participatory budgeting. Our presenters themselves are a diverse bunch, in terms of nationality, areas of expertise, and organisations they work for: we’ve got academics like Peter Cruickshank from International Teledemocracy Centre at Edinburgh Napier University, Civil Servants like Hille Hinsberg from the Estonian Cabinet Office, and Dominic Campbell, founder and Director of UK consultancy and social innovation incubator FutureGov. Then there’s Chuck Hirt, of the Central and Eastern European Citizens Network, André Basten and Hanss Christian Lange from the City of Hamburg … and I could go on. Full details will be published soon together with the final agenda at the summit page – so stay tuned!

The PEP-NET Summit is all about participation, and we have really tried hard to keep that in focus: a glance at the agenda will confirm that there will be plenty of time for discussion, whether in the presentation corners, during the question and answer sessions at the end of each keynote session, or at the end of the day when there is an hour dedicated to summarising and discussing what was said. If that isn’t enough networking for you, make sure you come along to the dinner in the evening. Finally, on the following morning we are offering a tour of Hamburg with an eParticipation focus.  Look forward to seeing you in Hamburg!

Last weeks resignation of Horst Köhler as Federal President is a unique incident in Germany’s history and demonstrates that social media have become a political force that can not be neglected anymore.

Horst Köhler resigned as Federal President because of public criticism of his comments about Germany’s mission in Afghanistan. Interestingly the radio interview in which he elaborated on the reasons for Germany’s international military engagement was broadcast by May 22nd already and did not lead to noteworthy coverage in the mainstream media.

The first to pick up Köhler’s controversial remarks about the relations of Germany’s economic interests and the Afghanistan mission was the fairly unknown blog unpolitik.de, followed by five others with a rather limited reach. In parallel also better known bloggers covered the story – but still none of the mainstream media (see carta.info for a detailed report).

One of the bloggers ( ) who felt especially disgusted about the media’s ignorance directly approached several big newspapers and magazines via twitter, asking for some reaction.

After “Deutschlandradio” broadcasted an interview with the Christian Democrat Ruprecht Polenz on May 27th, who said that Köhler expressed himself imprecisely, the media storm slowly gained momentum. A very critical report that appeared in Germany’s biggest news magazine “Der Spiegel” might finally have pushed Köhler over the edge.

But influence of social media did not end here. Pretty soon after the political class had overcome the state of shock, Chancellor Angela Merkel was said to have already a favourite for the vacant position: the quite well reputed Minister for Family Affairs, Ursula von der Leyen. Unfortunately von der Leyen became a hate figure among netizens in 2009 due to her ambitions to block Internet sites in order to fight child pornography. The respective policy was perceived by the net community as attempt to set up a censorship infrastructure generally enabling the government to block particular websites.

A strong and still growing network opposing these ideas quickly formed within the German internet community. (…) The HashTag used by the protesters is #zensursula – a German mash up of the Minister’s name and the word censorship equivalent to #censursula. As part of the public’s protest an official e-Petition directed at the German parliament was launched. Within three days 50,000 persons signed the petition – – the number required for the petition titled „No indexing and blocking of Internet sites“ to be heard by the parliament. The running time of an e-Petition in Germany is 6 weeks – within this time over 130,000 people signed making this e-Petition the most signed and most successful ever. (link)

dably this movement against net censorship was not delighted by the prospect of von der Leyen becoming Germany’s next President – and immediately revived the campaign. For the same reason but even more important the Liberal Democrats – part of the currently governing coalition – rejected the proposal as well.

The German chancellor adapted to the situation immediately and presented the state premier of Lower Saxony, Christian Wulff, as official candidate instead. END_OF_DOCUMENT_TOKEN_TO_BE_REPLACED