Only articles in with the "Hungary" tag are displayed 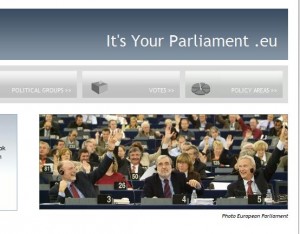 We have seen various examples , how national parliaments are using the data available in parliament records to display on websites.

It is unlikely to have a function to easily find and compare voting records of political groups and individual representatives. The data is from the 2004-2010 years, and obtained from the official site.

This mashup site: www.itsyourparliament.eu provides this function with a really accessible user interface and a possibility to comment.

This social responsible mashup have built and mantained by Buhl & Rasmussen without any financial support from the EU or other is a typical case, that we citizens like, admire and even encourage to follow – when somebody has the spirit, talent and skills to point out and re-engineer information holes based on public data sources.

This example highlights the importance of open standards and open data, which technically makes possible to build a services like this. Just like in the offline world, where accessibility to relevant information is a cornerstone for real participation, here, accessing data in appropriate format (open standard) is equivalent.

In Hungary, a success story of right defender NGO, HCLU (TASZ) is highlighting the issue of e-participation in civil campaigns.

After a journalist investigation on the planned new Hungarian Motor Race court’s financial background -  to involve state aid and loan /see the story here https://www.xpatloop.com/news/63685  -sorry, but the editor has some bugs now/, – a couple of NGO’s, dealing with transparency have started to run a small scale email campaign, to get different data, related to the planned investment.

A few hundreds of emails has resulted a big scandal in the Hungarian political arena, and saved 35billion Euros for Hungary.

Writing an email, signing a petition does worth the time investment of a few minutes. Although, there might be only 1 from 1000 cases to produce such a big saving, but we have to be aware and spend some time to scan trough our facebook group messages and emails.

A few minutes every day can make us better e-and-non-e citizens!

There has been an event, called Internetboat in Hungary, which primary focus is shifting each year – 2009 theme has been the vast plan for the Hungarian “Digital Public Works”, and the communicational activities from the government behind.

It is widly known, that these kind of events although trying to push together some stakeholders of the fields around the “Digital Public Works”, but the success is mainly based on the organizers creativity.

One interesting thing beside the real reason, why I am typing this article, is a programme from the Hungarian Telecottage Association – called the Digital Solidarity Catalogue.

It is in an old fashioned e-book format from Flipviewer – for me I see no reason, why not to use the internet for these kind of publishing acts – which is a collection of IT programs from different areas with a social focus. It is a nice collection with strong focus on Hungary.

During the last year, it has become obvious for most of us, that the culture of e-democracy is widely embedded in different political cultures of each country – and Hungary is in the disadvantaged group right know.

A strong representation for this, is in a slide – and a speech – which has been held by dr. Akos Balint, the programme leader of the Hungarian National Development Agenency’s (responsible for the EU-money programs) Public Service Reform Directional Program.

As can be seen on this slide – the EKOP programme for public service reform has 5 levels. It has been said, that this is align with the EU (?) structure of CLBPS (Common list of basic public services).

No doubt for us, that E-democracy is not part of the CLBPS, although, it has some relation to all levels. We should have the question in our mind – what is the reason for putting the power and trust that e-democracy can offer to societies to such a place, that will not have and support?

In my understanding, one solution, that mr.Bálint do not really know, what is e-democracy.

The other one is there is no real reason in the mind of the decision makers, to support e-democracy in Hungary from these programmes… I do not really want to choose. 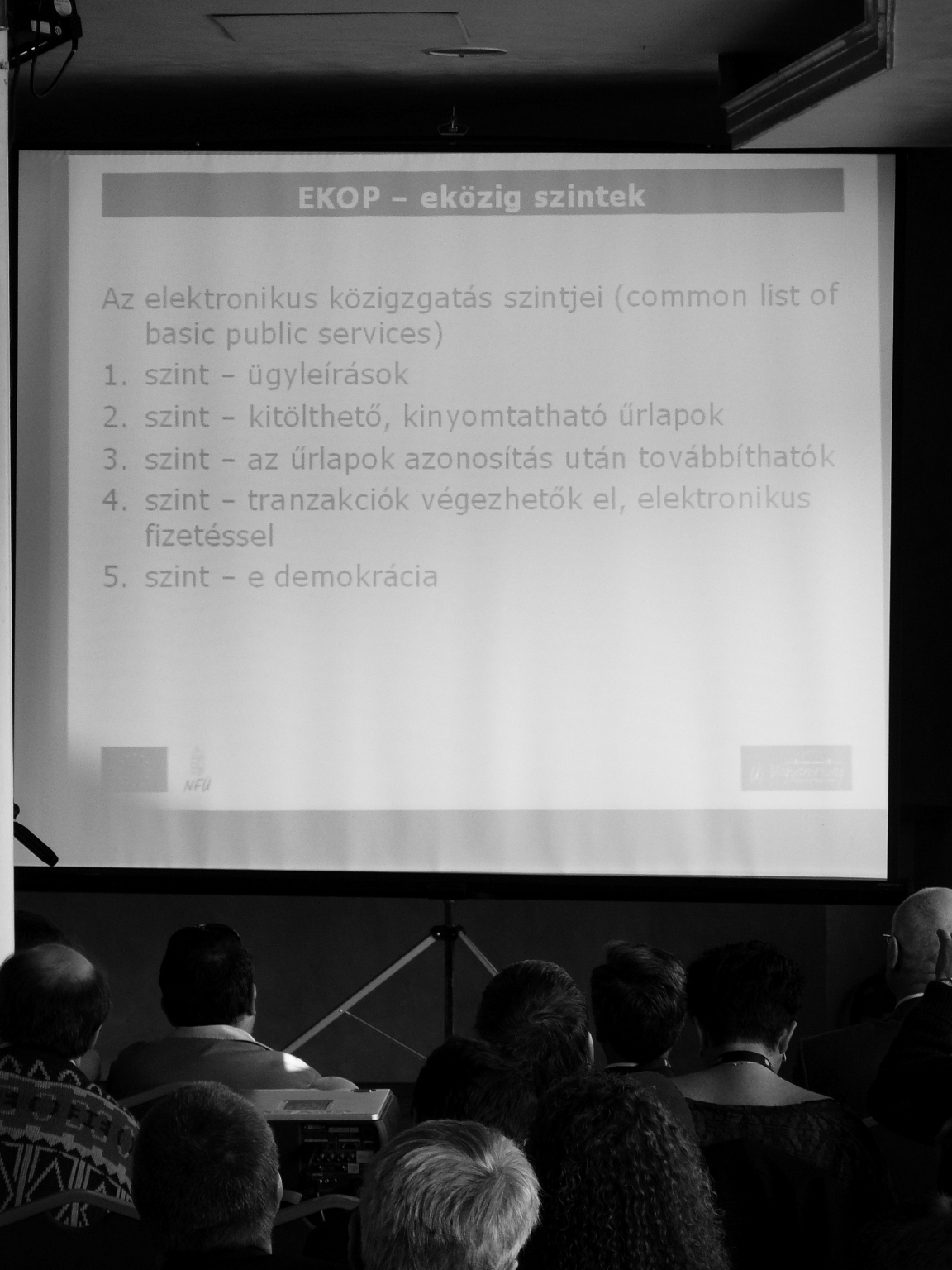 There are quite new “applicants” in this years EP elections all over Europe – small-big European parties now eligible Europewide for nominating candidates for the elections (for example Libertas.eu)

One, not among these bigger players has recieved attention in Hungary, by offering internet demorcacy, as a way and basic construction for representation.

By the volunteers run campaign, the party emphasizes, that they are planning to win one seat – and send each month one person from the supporters. It means, that by a number-generator method, 60 average citizen will have the opportunity to be a representative in the EP during the 5 years.

Their presence in the politica arena two important things – people, without the knowledge of scientifical terms and concepts of e-democracy and e-participation (I know they don’t have) are reinventing things on their own way, only by “mirroring” internet to governance structures. The second thing is that people are seem to be open for these kind of political flicks.

Do you have any similar example in your country?

and other citizen based approaches to change IT usage of Hungarian Government.

Since the Hungarian Taxation office has been producing the necesarry taxation program only for Windows based coputers, and has decided that all Hungarian businesses now have to submit their tax returns on-linem. The solution made online taxation not working for non-microsoft based computers, encouraging some of the Hungarian IT businessmen battleing against the ridiculous segregation.

“Why should a Hungarian national and EU citizen be forced to buy proprietary American software in order to communicate with his Government? There are many, many ways that a government can collect data on-line without forcing its citizens to buy expensive and unreliable foreign software.”

END_OF_DOCUMENT_TOKEN_TO_BE_REPLACED

The language barrier, the lack of common meaning is not the only problem if we are looking for initiatives, projects that are labelled as e-participation in Hungary. There are two other significant factors, that are helping e-participation to stay hidden for the investigating eyes.

The uncertainity of the w.r.s

The situation might be similar in many countries. But what seems to be a bigger problem, that e-participation and e-democracy is an unknown among the most journalists and scientists as well. Maybe this is not surprising, since democracy is a really new thing in Hungary, where people get used to follow dictation for decades, and the roots of fear from power and hopelessness to change the political elit has become one of our nations characteristics. But it is not only about the political elit’s behaviour – it is also about the general attitude towards learning, and citizenship culture.

It seems like that the only rich soil for e-participation are in the grassroots – in Hungary, among those, who understand technology, ready to apply their knowledge on a civil base. These things mostly happen by interest groups, as a reflection to unequal, or semi-democratic institutional behavior.

END_OF_DOCUMENT_TOKEN_TO_BE_REPLACED

The Hungarian landscape of e-democracy is like the Great Hungarian Plain. There are no hills on this field and the soil is ready for good seeds. The Hungarian e-government developments and strategy from the central government are not following the path of the fruitful cooperation with the civil sector, in a case, where democratic processes and e-technology is opening a new area for good investments from the leaders, authorities and governmental agencies, just like the citizens.

The lack of a government wide e-democracy strategy in this particular case, we will see is giving space a fairly good example coming from the civil society, with a some help from the parts of the government.

Today’s announcement, the opening of the ertunkvannak.hu portal counts as a unique example in this country, where above the cultural deficit of democracy, the language barriers are also affecting the spread and contextualization of e-participation culture and projects (we have no word for e-participation, and the direct translation sounds terrible).

END_OF_DOCUMENT_TOKEN_TO_BE_REPLACED

The Civil College Foundation (CCF) is a nationwide adult education organization which organizes practical training for citizens willing to act, the members of self-organizing communities, and the participants of community work and community development vocational training programmes.

The Civil College Foundation was founded in 1994 as a result of the joint recognition of an increasing demand for training in community development. The Civil College Foundation is a social, public benefit organization. In 2003 CCF became an accredited adult education institution, under registration number 07-0218-02 of the National Public Education Evaluation and Examination Centre (OKÉV), its institution accreditation is number 0317.

The foundation has purchased a derelict and ruined former elementary school building in Kunszentmiklós-Kunbábony. Having raised 40,000,000 HUF, it renovated the building and converted it into a modern training centre offering residential training facility for 24 + 8 people since 1997. The Civil College Foundation also organizes courses in other parts of the country, adjusting to local needs. At the same time, the community centre hosts events of local public life.

The activity of the organisation: Our trainings have two main groups.

The participants of the „civil trainings” are civil and community activists, who, with the help of the syllabus developed by the CCF trainers and through participation-based adult education methodology, learn how to think from their community’s point of view, learn civil action techniques, etc. These trainings are as follows: community, civil, democracy, community economics development and community media, democracy and Europe training;

The CCF also takes part in professional development projects in community development and in experimental adult education programmes. It has a wide-ranging international network, organises several major national and international events (conferences, seminars, community action programmes, inter-professional programmes) and is involved in the activities of several working groups in order to represent the case of citizen and community participation in the decision-making processes.