Only articles in with the "European Commission" tag are displayed

Much focus has been on Web 2.0 technology as an enabler for wider dissemination, awareness raising and not least participation and transparency. It is therefore interesting to see that Web 2.0 technologies are being used in various ways for a range of purposes in this year’s 5th Ministerial eGovernment Conference, 18-20 November, in Malmö (Sweden) and 4th European eGovernment Awards.

The plenary sessions and three of the parallel sessions at the Ministerial eGovernment Conference will be webcast live and on demand this year from the conference website www.egov2009.se. In addition the ceremony for the 4th European eGovernment Awards will most likely also be the subject of a webcast.

The programme is available on www.egov2009.se/programme

The online voting for the European eGovernment Awards Public Prize was therefore launched late this summer and closed on 11 November at 18:00 CET. Members of the epractice.eu community have been able to vote for their favorite cases from among the 52 European eGovernment Awards 2009 finalists.  The online vote is in addition to other ICT initiative by the awards consortium and the European Commission for a fully electronic submission process via www.epractice.eu and the remote evaluation of the received submissions by the jury in the first phase of the evaluation.

The voting is now closed but the 52 finalist cases remain published at ePractice.eu and are open to receive members’ comments.  The winner of the Public Prize will be announced at the awards ceremony on 19 November at 18:30 – and likely to the subject of a webcast.

For the first time the European eGovernment Awards finalist are accessible online through a virtual exhibition. The virtual exhibition can be visited on www.expopolis.com (NB: for practical reasons you have to register). Naturally an electronic version of the conference exhibition catalogue will be available on www.epractice.eu/awardsmediakit as of 19 November when the Ministerial eGovernment Conference and Exhibition opens.

A ministerial tour of the European eGovernment Awards Finalists stands will take place on 18 November 2009 at the Ministerial eGovernment Conference and Exhibition.

To enhance the promotion of the European eGovernment Awards Finalists 2009 17 country factsheets from those European countries from which finalists have been selected for the European eGovernment Awards 2009. The factsheets are published in English but will be made available in the relevant national languages in the beginning of November. The fact sheets are available with other dissemination material on www.epractice.eu/en/awardsmediakit

I am always loving  the opportunity, to give news of good, impressive, useful services, tools, that are coming from the citizens and their groups, empowered by technology and courage.

Most of us have heard about the Tenders Electronic Daily service of the European Union, which is a compelx service dedicated to European public procurement.

The TedBot is an innovative approach, to visualize the tenders and their results on a google map. In this form, it is a great example of how to use knowledge and personal interest to create an advanced service.

Hopefully, it will catch the eye of the European Comission, and will extend the TED with TedBot, showing a some megabites of wise leadership towards citizen initiatives.

But let’s do listen to the creator:

Participation supported by electronic tools is not just limited to political topics – this has been stated in relation to eParticipation in many discussions. Keeping this in mind the Living Lab approach which aims at involving users and stakeholders into research and development processes by using innovative often time’s electronic ways of organising cooperation is a close cousin of eParticipation. Yesterday I visited the Living Labs Information Day held by the European Commission in Brussels. This event gave me an overview of the LL activity in Europe and the possibilities arising from this trend for player from the eParticipation field.

The projects presented at this event ranged from research in wearable computing involving test sites in the Aerospace, Construction and Automobile industry (wearIT@work) to projects working on environmental friendly lighting in urban areas and different developers of ICT tools sets to making working in a Living Lab context easier. Almost all research and innovation field were present at the event and could make a convincing case that the LL approach is significantly helping them to produce innovation in their field. Besides the variety of participants the number of ca. 250 also spoke to the importance of this approach. In the European Network of Living Labs alone more than 100 LL are involved. The EC also supports this community using different programmes but the representatives where clear that the EC´s job is to support the cross border aspects and not the local or regional development.

The complexity of LL project is very high as dozens and more stakeholders have to be involved in a multi-step development process. The deep experience of the eParticipation community to organise complex communication processes and to work out conflicts in these processes could be of great help to the many different Living Labs active in Europe. It therefore is useful to build contacts into the LL community and try to find possibilities to gain advantages from each other. On concrete step in this direction could be to look for potential partners for future project proposals to the European Commission in that community.

Posted in Trends, TuTech | No Comments »

The European Commission supports eParticpation with lots of different instruments and we are grateful that PEP-NET is among the funded projects. One of the main objectives of our network is, as you may know, to connect the scattered fragments of the eParticipation community or even to help establishing something worth to be called a community.

This is very easy said but much harder done as I experienced the other day. I discovered that the eParticipation scene is more fragmented and relevant information are far more distributed than I expected. And I have to admit that I lost my way in the Commission’s eParticipation jungle. 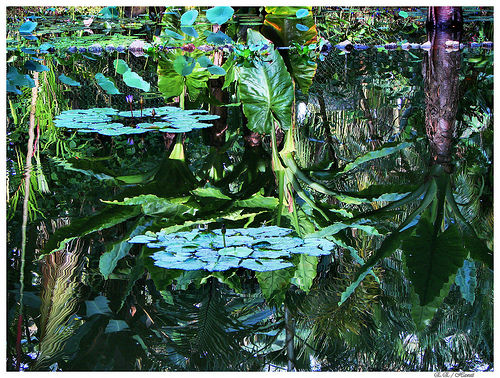 What has happened? Well, my trip started last week reading Simone’s PEP-NET post about Debate Europe, a project which I stumbled upon a few times without paying to much attention to it. END_OF_DOCUMENT_TOKEN_TO_BE_REPLACED

Discussion – Dialogue – Debate. That´s the slogan of the official discussion forum by the European Commission, “Debate Europe”. The Commission aims at actively listening to the public and getting involved into dialogue with citizens to raise trust in the European policy and to increase voter participation in the upcoming European elections 2009. The forum “Debate Europe” should gauge public opinion about the EU and about three important pan-European topics: climate change and energy, Europe’s future, Intercultural Dialogue. Additionally there is a forum for more general discussion about the EU and its institutions. European citizens from all Member States are invited to join and to debate with other citizens and members of EU institutions. END_OF_DOCUMENT_TOKEN_TO_BE_REPLACED

The Council of ministers of the European Union issued a press release on November 27th which states the adoption of a strategy to reinforce the fight against cyber crime. Computer crime or cyber crime is a major problem of the networked world we live in. Spamming, Phishing and Identity theft are just a few of the potential crimes which can be committed using networked computers or other telecommunication devices.

From this angle it seems both reasonable and positive that the European Organisations try to crack down on these kinds of crimes. But a deeper look into the announcement and especially the proposed tools raises doubts and concerns. The Council suggests “operational measures, such as cyber patrols, joint investigation teams and remote searches to become part of the fight against cybercrime in the next five years”. The strategy also includes plans to link the different investigation forces in the member states closer together to improve their efficiency.

END_OF_DOCUMENT_TOKEN_TO_BE_REPLACED

As part of the ongoing eParticipation study eParticipation Study – titled “Study and supply of services on the development of eParticipation in the EU” -  for the European Commission (DG Information Society and Media) the following project deliverables has been submitted to the client and now published:

As part of the study’s initial analysis of eParticipation practitioner initiatives in Europe 216 cases from 18 countries and in 29 different languages have been identified to date and are initially available on our project website.

The first of three iterations of eParticipation related recommendations is also available now on our project website. At the end of the study the third and final iteration will provide a set of practical, and intellectually rigorous, recommendations. The recommendations aim to answer and specify (mainly at European level) the following:

However, rather than attempting to provide recommendations at this early stage of the project, this first iteration pose a number of tentative questions. Questions which reflect some of the main lines of enquiry appropriate to the study and may help frame the final recommendations. The questions have arisen as a result of the work carried out to date and the current report may as a result also serve as a partial overview of the study as it currently stands.

The next wave of deliverables is foreseen for publication in October/Novermber 2008 and will include updates of all current findings. The second version of the deliverables will therefore reflect the further analysis carried out by the Consortium as well as take into account comments made by the project’s Peer Review Group and the European Commission.

All deliverables are available on the publications/public deliverables section of our project website: www.european-eparticipation.eu.

For further and related information please visit www.european-eparticipation.eu or the eParticipation and eDemocracy Network www.epractice.eu/community/eparticipation.

As you may already be aware the European Commission (DG Information Society and Media) funded eParticipation Study – titled “Study and supply of services on the development of eParticipation in the EU” – is currently underway and in this connection the first wave of deliverable has now been prepared and submitted to the EC and a group of external peer reviewer (see www.european-eparticipation.eu for further details).

In addition the following deliverables will be available end of July:

This first wave of deliverables will be updated for the next deliverables wave expected in October/November 2008. The second version of each deliverable will take into account comments by the European Commission and the project’s peer review group as well as further work conducted by the Consortium Partners in the intervening period.

You may view all deliverables in the publications/public deliverables section on www.european-eparticipation.eu or directly on https://195.251.218.37/eP//index.php?option=com_content&task=view&id=39&Itemid=2

If you have not already done so, you may wish to register for the eParticipation and eDemocracy Network on https://www.epractice.eu/community/eParticipation.

Posted in News, Projects | No Comments »